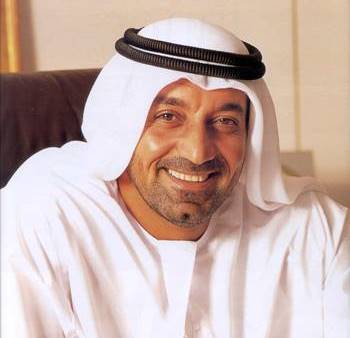 The Emirates Group Thursday announced its half-year results for 2015-2016, showing continued business growth and a strong performance.
The Emirates Group revenue reached AED 46.1 billion (US$ 12.6 billion) for the first six months of its 2015-16 financial year, down 2.3% from AED 47.2 billion (US$ 12.9 billion) during the same period last year, reflecting the impact of the strong US dollar against major currencies.

The Group marked one of its best half-year profit performances ever, with net profit rising to AED 3.7 billion (US$ 1.0 billion), up 65% over the last year’s results. The Group’s cash position on 30th September 2015 was at AED 14.8 billion (US$4.0 billion), compared to AED 20.0 billion (US$ 5.5 billion) as at 31st March 2015. This is due to ongoing investments mainly into new aircraft, airline related infrastructure projects, and business acquisitions.

His Highness (HH) Sheikh Ahmed bin Saeed Al Maktoum, Chairman and Chief Executive, Emirates Airline and Group said: “Our top-line figures were hit hard by the strong US dollar against other major currencies. The currency exchange situation, combined with ongoing regional conflict and weak economic outlook in many parts of the world, dampened the positive impact of lower fuel prices during the first half of our 2015-16 financial year. However, we made a calculated decision not to hedge our fuel purchases, which paid off as fuel prices continued to soften. Emirates also made the decision to pass on savings from the lower fuel prices to our customers by cutting passenger fuel surcharges, and lowering fares across the network.”
He added: “That the Group is reporting one of its most profitable first half-year performances ever, speaks to the strength of our underlying business. In first six months of this year, Emirates and dnata grew in terms of capacity, capability and global reach – organically, and for dnata through strategic acquisitions as well. Looking ahead, we will continue to build on our core strengths by investing in new ways to improve efficiencies and deliver the best customer outcomes. At the same time, we will keep an eye out for strategic growth opportunities, and stay agile so that we can respond effectively to external challenges.”
In the past six months, the Group continued to develop and expand its employee base, increasing its overall staff count by 4 per cent to over 87,000 compared with 31st March 2015.
During the first six months of the financial year Emirates received 13 wide-body aircraft – 8 A380s, and 5 Boeing 777s. It also retired 4 older aircraft, resulting in a net increase of nine new aircraft for its fleet, with 16 more new aircraft scheduled to be delivered before the end of the financial year (31st March 2016). Emirates also expanded its global route network by launching services to four new destinations – Bali, Multan, Orlando, and Mashhad. As of 30 September, Emirates’ global network spanned 147 destinations in 79 countries. Bologna came online on 3rd November, and Panama City will be launched on 1st February 2016.
Operating the world’s largest fleet of A380s and the largest fleet of Boeing 777s, Emirates continues to provide ever better connections for its customers across the globe with just one stop in Dubai.
In the first half of the 2015-16 financial year, Emirates net profit is AED 3.1 billion (US$ 849 million), up 65% from the same period last year. This performance reflects the impact of lower fuel prices, and also the airline’s continued ability to grow passenger demand in line with significant capacity growth, despite external challenges such as continued regional unrest and economic malaise in many regions, and increased competition adding downward pressure on yields.
On average, fuel prices were 41% lower compared to the same period last year. Fuel remained the largest component of the airline’s cost, accounting for 28% of operating costs compared with 38% in the first six months of last year.
Capacity measured in Available Seat Kilometres (ASKM), grew by 16%, whilst passenger traffic carried measured in Revenue Passenger Kilometres (RPKM) was up 11% with average Passenger Seat Factor dropping slightly to 78.3%, compared with last year’s 81.5%. Emirates carried 25.7 million passengers between 1 April and 30 September 2015, up 10% from the same period last year. The volume of cargo uplifted was up by 10% to reach 1.25 million tonnes, a solid performance that continues to buck the market trend.
This performance shows the airline’s continued business growth, both in terms of capacity on offer and traffic carried, even accounting for the fact that during the same period last year, the airline had temporarily reduced capacity when it parked 17 aircraft due to the runway closure at Dubai International.
Emirates revenue, including other operating income, of AED 42.3 billion (US$ 11.5 billion) was slightly down by 4% compared with AED 44.2 billion (US$ 12.0 billion) recorded last year. This is due to the combined effect of an unfavourable currency environment – where the US dollar strengthened significantly against most other major currencies; and lower average fares reflecting the airline’s decision to pass on some of its fuel cost savings to customers.
dnata continued to grow its international business footprint, investing in infrastructure and operations which now span 74 countries. In the first half of 2015-16, dnata’s international operations accounted for over 67% of its total revenue.
dnata’s revenue, including other operating income, is AED 5.2 billion (US$ 1.4 billion), a strong 27% increase compared to AED 4.1 billion (US$ 1.1 billion) last year. Overall profit for dnata increased by 64% to AED 557 million (US$ 152 million). This outstanding performance was underpinned by the first full year contribution of dnata’s major acquisitions Stella Group, and Toll dnata. Also, on a comparable basis, last year’s performance had suffered significantly due to the one off runway closure at Dubai International Airport.
dnata’s airport operations remained the largest contributor to revenue with AED 2.4 billion (US$ 645 million), a 21% increase compared to the same period last year. This reflects the internal alignment of dnata’s airport services and cargo handling divisions, its growing international operations with the acquisitions in Australia and Europe, and as mentioned earlier, a rebound from the impact of the runway closure at Dubai International airport during the same period last year.
Across its operations, the number of aircraft handled by dnata increased by 21% to 169,951, and it handled 917,065 tonnes of cargo, and increase of 10% over last year.
Boosted by its major international acquisitions in the past 18 months, revenue from dnata’s Travel Services operation contributed AED 1.7 billion (US$ 469 million), up 90% from the same period last year. The travel division expanded its international offering with the acquisition of Stella Group, which contributed to a substantial increase in the division’s underlying net sales of 62% to AED 6.2 billion (US$ 1.7 billion).
dnata’s flight catering operation, contributed AED 0.9 billion (US$ 257 million) to its total revenue, down 8%. The number of meals uplifted* was at 32.7 million meals for the first half of the financial year, up 4% compared to last year’s figure of 31.4m.

Can Nigeria expect investment boom in its mining sector?