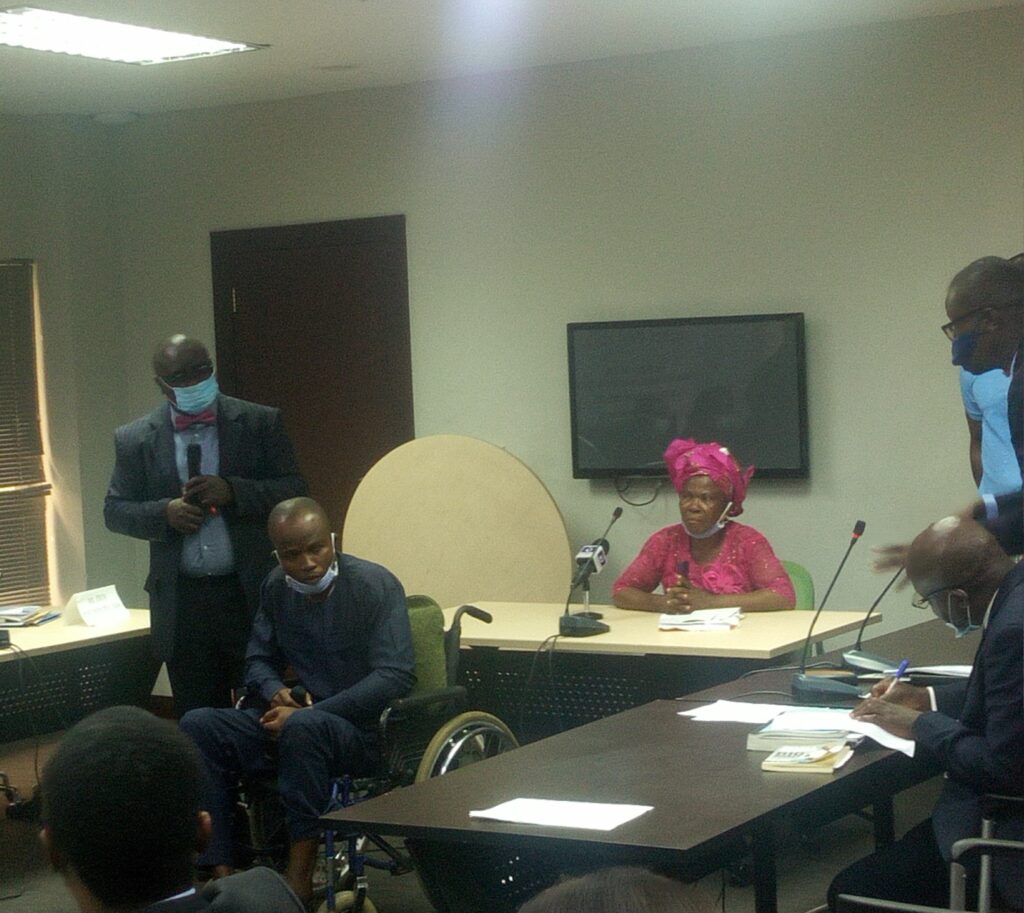 A 34-year-old trader, Mr Ndukwe Ekekwe, allegedly paralysed by officers of the disbanded Special Anti-Robbery Squad (SARS) on Friday presented before a Lagos judicial panel of inquiry, a photograph of one of the officers allegedly responsible for his paralysis.

It was reported that the trader presented the photograph of one Haruna Hamza while being cross-examined at the Lagos State Judicial Panel of Inquiry for Restitution for Victims of SARS Related Abuses and Other Matters.

Responding to questions from Mr Emmanuel Eze, counsel for the police, Ekekwe narrated how he obtained the photograph.

“I have his (Hamza’s) contact. When this (paralysis) happened to me, I prayed that God should help me. I went online and I saw his status on WhatsApp and I took a photograph of his photo.

“The contact from which I got his photograph is 07060712007. He gave it to me before I was taken to the Lagos University Teaching Hospital (LUTH),” Ekekwe said.

It was reported that Ekekwe had on Nov. 3 told the panel that he was paralysed when he was thrown from a two-storey building at the Alaba International Market by SARS.

The trader told the panel on Friday that Hamza was a member of the SARS team which arrested him at Alaba International Market and took him to SARS office in Ikeja.

He alleged that after his arrest, his teeth were broken when he was tortured by the team at SARS office.

He said that he had yet to be told the crime he committed.

“This is the policeman, the devil that made me like this. Nothing will make me forget him,” he said.

The Chairman of the panel, retired Justice Doris Okuwobi, admitted the photograph in evidence.

“The photograph of a fair-skinned man wearing a cap is admitted into evidence as Exhibit F,” she said.

The petitioner told the panel that he could identify the SARS office in Ikeja where he was allegedly detained.

“When they came to my shop, SARS was written at the back of their shirts. It was officers in uniform that took me there.

“I do not know how to describe their station but I can identify the place,” he said.

Ekekwe said that he was arrested in his shop by SARS on Feb. 16, 2018, and spent two days in police custody.

“I was arrested around 2p.m. and taken back to the shop the next day in the evening.

“I was shouting and alerting people when they broke into my shop and tried to sell off my goods. The commander told two of them to take me upstairs.

“When I was taken upstairs, they pushed me from my shop building. This was around 8p.m. I couldn’t see the officer who pushed me,” he said.

Following the allegation, Eze requested for a 20-minute stand-down (break) in order to consult the other members of the police legal team.

Eze’s request was granted by the panel.

However, when the panel reconvened after the break, the police counsel requested for a short adjournment of the proceedings.

He said that the team was unable to get in touch with some officers of the disbanded SARS.

“We are in the process of getting there, the phone number that the petitioner provided did not go through.

“In the overall interest of justice, we apply for this adjournment,” Eze said.

Responding, Okuwobi expressed dissatisfaction at the slow pace at which the police were handling the case.

She said that Ezekwe’s petition was just one of over 100 petitions being handled by the panel.

“If this panel is taking baby steps, it will not be able to do its assignment within the six months.

“I am constrained to allow this adjournment in the interest of justice.

“This hearing is adjourned to Dec. 1,” she said.

U.S. actors union to decide whether to expel Trump

Tiger Woods has another back surgery