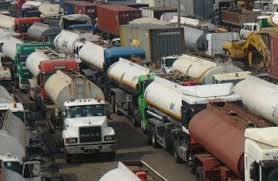 Anyone seeking for the definition of hell should as well look on Lagos roads, especially the Oshodi-Apapa Expressway. That stretch of highway has been taken over by trailers and other articulated vehicles, which have succeeded in creating one of the most chaotic traffic gridlocks ever in the Lagos metropolis. Unfortunately, the government agencies responsible for traffic administration in the state are looking helpless and overwhelmed. Investigations reveal that the high volume of traffic on the roads is as a result of the suspension of the 10-Day strike by trailer drivers who were protesting the ban on their movement by the state government.
Matters are not helped by fact that the drivers are becoming more brazen by the day while parking their vehicles indiscriminately on the roads thereby impeding the smooth flow of vehicular traffic. Consequently, commuters are now condemned to trekking long distances before getting alternative means of transportation to their various destinations, even as other drivers now spend long hours trapped in the harrowing traffic snarl. We vehemently condemn the action of these trailer drivers in taking over the highways and turning them into vehicle parks without due regard to traffic rules and regulations.
In the same vein, it is pertinent to call on the state and federal authorities to live up the responsibility of making the roads safe for other commuters by clearing the obstructions posed by these vehicles. People are beginning to ask what is responsible for the present state of affairs given that not too long ago, the state government embarked on massive road construction, opening of inner roads, enactment of traffic laws, introduction of Bus Rapid Transport (BRT) and traffic lights in some areas notorious for traffic gridlock and empowerment of the Lagos State Traffic Management Authority (LASTMA) to arrest and impose fines on erring drivers.
However, observers point to the growing indiscipline among motorists, even as others see corruption on the part of government officials who enforce traffic and environmental laws as the culprits. Other human activities that complicate the traffic situation in the state include driving against traffic, making illegal U-turn, using reverse drive to cover long distances in order to beat traffic jams, and disobeying traffic lights as well as other road ordinances.
It is time the government takes another look at its traffic regulation strategies in order to employ more creative ways of dealing with this monster. We suggest that the government through its Public Works Corporation (PWC) embark on the immediate rehabilitation of damaged roads in the state, especially in this rainy season when most of them are in an alarming state of disrepair. There is a growing need to evolve an integrated approach to public transportation, which entails the simultaneous use of road, rail and water, as means to effectively address traffic jams in the state.
With more than five million cars and 300,000 commercial vehicles, Lagos has an average of 327 vehicles per kilometre of roads. This scenario makes it imperative to vigorously pursue alternative modes of transportation for mass transit.
Nevertheless, road widening should be embarked upon to reduce traffic congestion, even when it is thought to be expensive and may provide only modest congestion reduction benefits in the long run. However, a huge degree of additional capacity would be needed to reduce urban traffic congestion. In addition, the engineering design of the roads should also take into consideration pedestrian walkways, zebra crossings, and pedestrian crossing as well as appropriate parking design standard. Lastly, we advocate that progress on the Lagos light rail project be speeded up, as this will reduce road congestion, it would greatly ease commuting and end the perennial curse of traffic gridlock in the city.