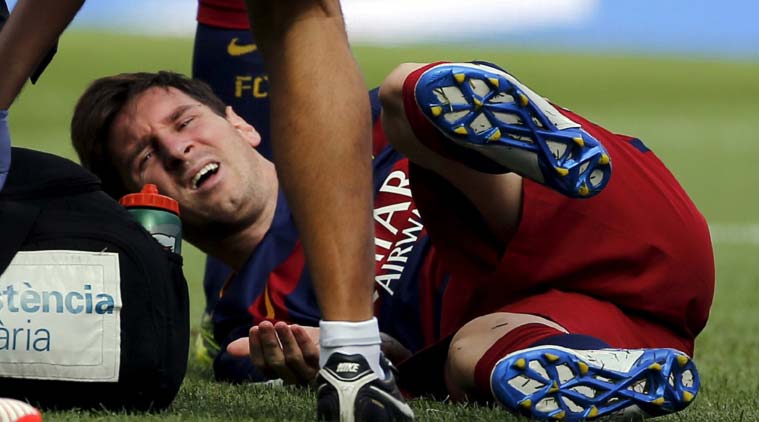 With Barcelona’s squad already stretched, the loss of talisman Lionel Messi is a major blow but for the Bayer Leverkusen players there will no doubt be sighs of relief ahead of their Champions League tie on Tuesday.

Among the Argentine’s vast list of exploits he became the first player to score five goals in a Champions League match when Barca hammered Leverkusen 7-1 at the Camp Nou in 2012, but the treble winners will have to cope without him for the next two months.

Messi suffered knee ligament damage in Barca’s La Liga victory over Las Palmas on Saturday and they take on Leverkusen in their Champions League Group E clash with limited options to replace him in attack.

The Fifa transfer ban for signing underage players that prevented Barca bringing in reinforcements over the last two transfer windows along with the sale of Pedro to Chelsea and the long term injury for Rafinha has left them with mainly youth players as back-up.

“It is always sad when a player is injured. In the case of Messi it is not necessary for me to say what we all know that he is very important to the team,” Barca coach Luis Enrique told reporters.

“Without Messi we lose a lot of things from our style of play that we will now have to rearrange collectively but I have no doubt that we will overcome this.”

Leverkusen still have to deal with Neymar and Luis Suarez, the other components of an attacking trident that bagged 122 goals last season and Luis Enrique feels the absence can even be an opportunity for the team as a whole to show its value.

“This team will cope fine and will deal with this,” he said. “It is capable of doing so well because it has personality and courage. It can be seen as a test and a stimulus.”

Leverkusen lead Group E having won their first game against BATE Borisov and face Barca on the back of two straight wins in the Bundesliga having overcome Werder Bremen 3-0 on Saturday.

Even without Messi, the Leverkusen players are not underestimating the size of their challenge.

“Barcelona have a lot of top players in their team,” said midfielder Lars Bender.

“Every player dreams of a match like this and although we know the opponents are strong we will still come with our own game plan.”

Related Topics:UCL: Messi blow a likely big relief for Bayer
Up Next

Liverpool’s players back Rodgers after win over Villa