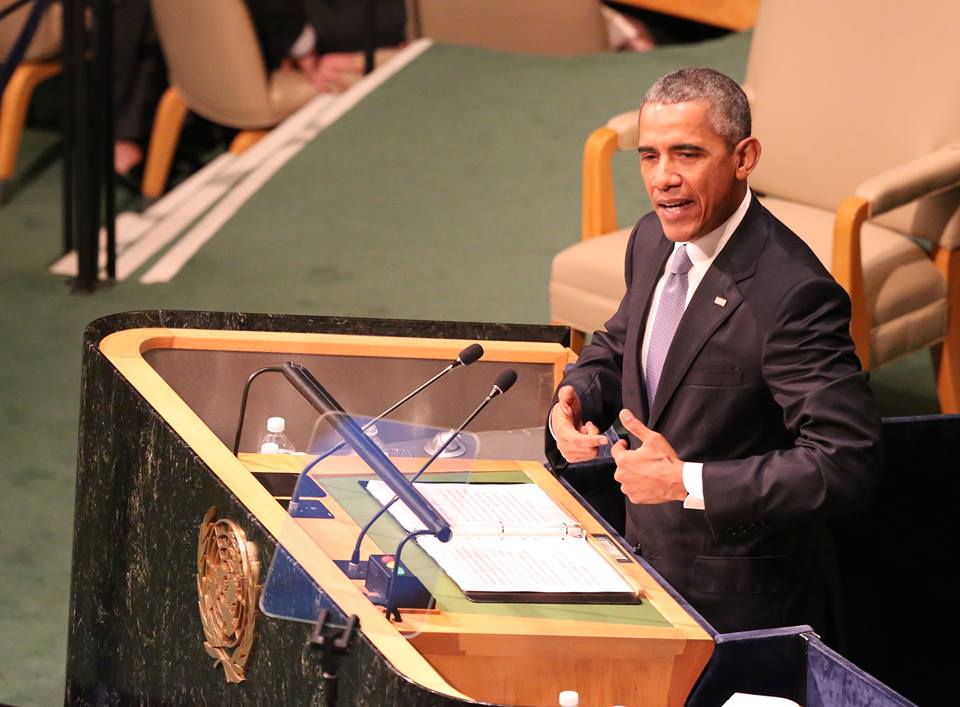 President Barack Obama has said the US is prepared to work with any nation, including Russia and Iran, to resolve the conflict in Syria.

He told the UN General Assembly in New York compromise would be essential for ending the long civil war.

But he said realism required a “managed transition” away from Syria’s President Bashar al-Assad to an inclusive leader.

He and Russian President Vladimir Putin, who is a key ally of Syria, are to hold rare talks later.

The assembly in New York is expected to see intense diplomatic activity on the conflict, which has claimed more than 200,000 lives and forced four million to flee abroad.

In his remarks, Mr Obama called President Assad a “tyrant” who dropped barrel bombs on children.

“Lasting stability can only take hold when the people of Syria forge an agreement to live together peacefully,” he said.

“The US is prepared to work with any nation, including Russia and Iran, to resolve the conflict. But we must recognise that there cannot be, after so much bloodshed, so much carnage, a return to the pre-war status quo.”

The summit is due to hear from Mr Putin shortly, as well as Iranian President Hassan Rouhani and French President Francois Hollande, whose country has just carried out its first air strikes against Islamic State (IS) militants in Syria.

A famous Russian expression talks about “killing two hares with one shot”. But Vladimir Putin doesn’t do things by halves: he’ll be trying to slay a whole multitude of political and economic hares with one trip to New York.

His UN speech and meeting with President Obama will put President Putin centre stage: a return to the international limelight for a leader shunned by the West over the conflict in Ukraine.

And if he convinces President Obama to put aside their differences and join together in the fight against Islamic State, Russia stands to gain on many levels: by retaining a degree of influence in Syria; by boosting Russian national security (Moscow acknowledges that IS constitutes a threat to Russia); and, crucially, by improving Russia’s international image – rebranding her from pariah to partner and refocusing attention from the conflict in Ukraine.

If Vladimir Putin achieves that, it could be the first step towards easing Western sanctions.

First, though, he will need to convince the US to trust him. It may be a hard sell.

In his speech, UN Secretary General Ban Ki-moon said five countries – Russia, the US, Saudi Arabia, Turkey and Iran – were key to finding a political solution, but unless they could compromise it would be “futile” to expect change on the ground.

Moscow has suggested there are plans to form an international contact group involving all the countries Mr Ban mentioned plus Egypt.

The threat of IS extremists and the flow of Syrian refugees to Europe has added urgency to the search for a deal to end the civil war.

Western leaders have recently softened their stance towards the Syrian president, conceding that he might be able to stay on during a political transition.

Putin, who has strongly reinforced Russia’s military presence in Syria, has called for a regional “co-ordinating structure” against IS, and said the Syrian president’s troops were “the only legitimate conventional army there”.

He said Russia would not participate in any troop operations in Syria.

President Rouhani – a key regional ally of President Assad – says the government in Damascus “can’t be weakened” if IS militants are to be defeated.

Related Topics:Iran to end Syria conflictUS prepares to work with Russia
Up Next