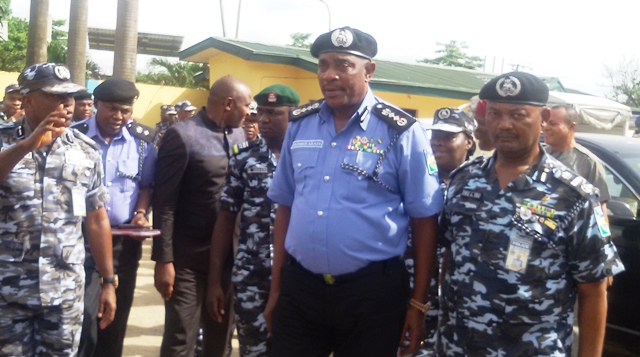 A Lagos based lawyer, Mr. Bamidele Ogundele has called on the Inspector General of Police, Solomon Arase to call to order some of his officers who are being used to harass and terrorised some community leaders in the Lekki Area of Lagos State over land dispute.

Ogundele, in a Save Our Soul (SOS) letter written on behalf of the community leaders, alleged that a certain Deputy Commissioner of Police, Mr. Oyinlola Adeoye of the X Squad, Force Criminal Investigation Department, Alagbon, Ikoyi Lagos has continued to allowed himself to be used to terrorise some principal members of the Dada Bakare Family of Abijo Town, Ibeju Lekki local Government Area of Lagos State.

According to the letter signed by Ogundele and Raimi Oluwaseyi Nojeen on behalf of the family, the action of the Deputy Commissioner of Police usually carried out by one of his officers, Prince Dosunmu, is capable of leading to the breach of peace, lawlessness or outright anarchy if not checked.

The family (Dada Bakare) claimed that they are the traditional owners of a large parcel of land totalling 75,000 hectares at Abijo Village, which was officially Gazetted by the Lagos State Government with No. 55 Volume 40 of 2007.

Dada Bakare Family stated that they were surprised when one Alhaji Akeeb Alarape Adams popularly known as Adamak, a native of Lamgbasa Village of same Ibeju Lekki brought some land grabbers to take over their land without their consent or authority of the family.

They alleged that the said Alhaji Adams recruited the services of the Deputy Commissioner of Police, Oyinlola Adeoye, who has been giving security backing to the illegal and unconstitutional actions of the hoodlums hired by Alhaji Adams.

“Coupled with this, the rights of the Dada Bakare Family members to human dignity, liberty and freedom of movement as guaranteed by Section 34, 35 and 41(1) of the 1999 Constitution (as amended) as well as Article 4,5,6 and 12 of the African Charter of Human and Peoples Right Law of the Federation 2004, were curtailed and violated on several occasions.

“We forward a petition to the office of the Inspector General of Police and our matter was assigned to the P.R.O Department of Force CID, Area 10, Abuja and the case file of X Squad, Force CID, Alagbon, Ikoyi, Zone 2, Onikan and Area J. Ajiwe Police Headquarters were all retrieved for discreet and God fearing investigation”, they stated.

The family said despite the intervention of the Inspector General of Police and transfer of the case file, DC Adeoye still continue to harass and intimidate them at the instigation of Alhaji Akeeb Alarape Adams.

“Yesterday (September 22, 2015), one of our family members, Mrs. Sikiratu Aduni Lawal was arrested by DC Adeoye’s team at the instigation of Alhaji Akeeb Alarape Adams in total disrespect to the authority of the Deputy Inspector General of Police, Force CID Area 10, presently handling the matter”, the family stated.

They however called on Chairman of the Police Service Commission and Inspector General of Police to investigate the activities of DC Adeoye and Prince Dosunmu for dabbling into land dispute matter.

The family also called on Code of Conduct Bureau to investigate the ill-gotten wealth of DC Adeoye, who they alleged have several lands and vehicles as a result of the proceeds from the Abijo land dispute.

Related Topics:Call your officers to orderLawyer tells Arase
Up Next