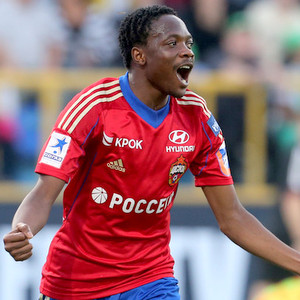 The forward netted in the seventh minute to give the Russians the lead at the Arena Khimki.

Musa latched on to a super corner taken by Zoran Tošic and with the PSV defence failing to clear, the Nigerian winger swept home from three yards.

It was Musa’s third Uefa Champions League goal of the season as he continues to enjoy a barnstorming start to the season.

Musa has now scored eight goals for CSKA in all competitions this season following the five he netted for the Army club in 10 Russia Premier League this season.

Wednesday’s win for CSKA helped them move up to second in Group B ahead of Wolfsburg, Manchester United but PSV currently occupy top spot.

CSKA are also top of the Premier League in Russia having amassed 26 points from 10 games.

Related Topics:Nigeria's Ahmed Musa on target as CSKA crushed PSV
Up Next