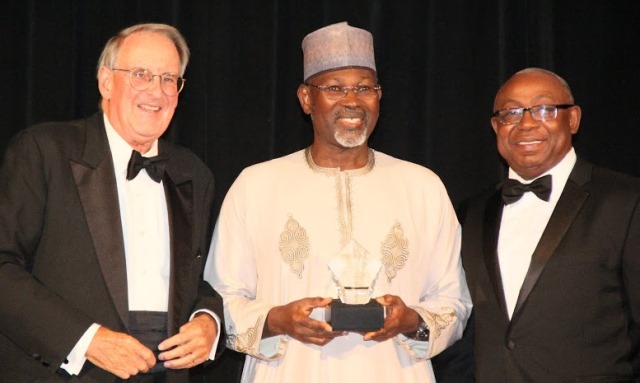 Professor Attahiru Jega, the immediate past Chairman of the Nigeria’s Independent National Electoral Commission (INEC), has expressed the optimism that increasing use and mastery of technology by the commission would enhance the transparency and credibility of Nigerian elections.

He said despite momentary challenges encountered with the Smart Card Reader in the 2015 general election, its use along with chip-based Permanent Voter Cards (PVCs) contributed in a major way to the positive acclaim of the elections.

Professor Jega spoke in Washington, United States, where he was given the 2015 Charles Manatt Democracy Award by the International Foundation for Electoral Systems (IFES).

Other awardees along with Professor Jega were the first female Speaker of the U. S. House of Representatives and currently its Democrat Caucus Leader, Hon. Nancy Pelosi, and Chairman of the US House Committee on Foreign Affairs, Republican Hon. Ed Royce. The ceremony on Tuesday, 29th September 2015, was the sixth of the annual award whereby IFES singles out a US Democrat, a Republican and an International Awardee to be honoured for contributions to global growth of democracy.

The former INEC Chair noted that credit for the success of Nigeria’s elections was not his alone but also his colleagues in the Commission, the different stakeholder groups and international partners, and especially the generality of Nigerian citizens.

He said: “I am humbled to be receiving the 2015 Democracy award, and will also like to recognise my colleagues at INEC for their dedication to a credible and transparent electoral process. Since I assumed the chairmanship of INEC in 2010, we worked hard to make the commission an Election Management Body (EMB) characterised by professionalism and integrity. From the beginning, our mission was not to just improve INEC, but to make it one of the most effective EMBs in the world.

“Over the last five years, we’ve come a long way in the conduct of elections in Nigeria, and I think the outcome of the 2015 elections speak directly to this work. All my colleagues at INEC share the credit for this success. The mood in my country presently is extremely upbeat, following the first democratic transfer of power in our history. The Commission, political parties, security services, civil society organisations and, most importantly, the Nigerian citizens should all be commended for their contribution to peaceful conduct of the elections, just as should our international partners.”

Professor Jega recalled the challenges encountered during the 2015 general election and how INEC responded. He said: “No election is ever perfect, and the Nigerian 2015 elections were not without controversy. After an engagement with various security agencies and stakeholders, INEC decided to postpone the elections by six weeks from its original date; and, of course, this generated a lot of controversy. But we had over 750,000 election workers and millions of citizens involved on Election Day, and ultimately chose not to put anyone at risk.

“The electronic PVCs and Card Readers that we introduced during the election cycle went a long way to improve the credibility of the electoral process in Nigeria. While there were some problems with the Card Readers, contingencies put in place by INEC ensured that voters were not disenfranchised. As INEC grows increasingly adept in its use of technology, such tools will only bolster the transparency of the electoral process in Nigeria.”

He urged the international community to stay alert on the Nigerian electoral process, saying: “Consolidating and deepening democracy in countries like Nigeria with a long history of authoritarian rule requires a collective and collaborative endeavour among domestic and international stakeholders. IFES has recognised this and partnered with INEC accordingly. In order to hasten democratic consolidation, I wish to call on all friends of Nigeria to continue to closely monitor the democratisation process in my country.”

In his remarks before presentation of the award to Professor Jega, IFES President and CEO, William R. Sweeny, described the Nigerian 2015 elections as “an important statement about the viability of democracy in countries experiencing transition.”

He said: “From the time Professor Jega took his oath of office as chairman of the Commission in late 2010, he introduced a new level of integrity to the public institution, and introduced new policies and measures to improve its efficiency. Despite a highly politicised and polarised environment in Nigeria, he managed to maintain a reputation and gained the trust and respect of the civil society, the media, the political parties and the people of Nigeria.

“This year’s elections in Nigeria were a significant step in the right direction for democracy in Africa. They represent a sign of hope for all of us. These elections were an important statement about the viability of democracy in countries experiencing transition. There are more elections scheduled in Africa in the next two years than on any other continent, and African voters have a clear choice between the ballot and the bullet. Thanks to Professor Jega’s leadership and the leadership of the Nigerian people, Nigeria offers others an example to follow.”

Speaking at the New York award, the former INEC Chairman expressed joy that Nigeria had become a role model for other African countries in the conduct of elections. He said: “I was privileged to be invited to chair INEC, and we put in our best to salvage the Commission – being an institution that had a very bad name in terms of conducting elections on our continent. We saw it as a challenge, we seized the opportunity given to us by our country, and we did our best.

“Among other things, we promoted stakeholder involvement, participation and collaboration; we undertook training and retraining of INEC staff with the support of development partners; and we also introduced the use of technology to help us deal with persistent fraudulent activities that were associated with Nigerian elections.

“We improved the Register of Voters, because we knew that the integrity of any election is co-related with the integrity of the voter register. We did biometric registration of voters, and for the 2015 general election, we introduced the use of the Smart Card Reader to ensure that only those who actually registered were able to vote. Thank God that all these efforts resulted in elections that have been recognised as the best in Nigerian history, and certainly ones that many other African countries may draw lessons from.”

NHEF President and Founder/CEO of Kuramo Capital Management, Wale Adeosun, said Professor Jega was chosen for the Integrity Award because a key consideration among American businessmen seeking to invest in Nigeria is political stability, and the ex-INEC Chair contributed largely in promoting that through the 2015 general election.

The New York event was attended by prominent Nigerian and American business as well as political figures, including former U. S. Ambassador to Nigeria, Ms. Robyn Sanders.

Related Topics:Ex-INEC Boss hopes in technologyurges global attention to Nigeria
Up Next