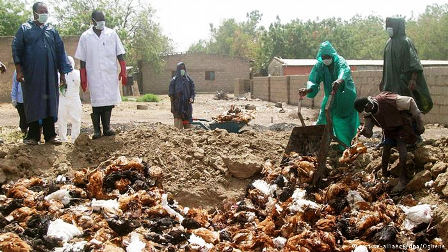 Poultry farmers in Nigeria have been mandated to ensure total eradication of avian influenza, also known as bird flu across the 36 states of the federation and the Federal Capital Territory.

Speaking at a stakeholders meeting with the poultry industry, in Abuja, the Permanent Secretary, Ministry of Agriculture and Rural Development, Architect Sunny Echono, disclosed that so far the disease had spread to 85 local government areas in 20 States and the Federal Capital Territory, affecting 491 farms, resulting in the depopulation of over one million birds.

Echono noted that the depopulation had accrued over N1.1 billion compensation to affected farmers in the affected states, stating that the compensation exercise would cease until the farmers adhere to the ministry’s guidelines of providing adequate biosecurity in their farms.

He described bird flu as a viral disease of poultry that is both economical and public health significance; accusing the States’ Veterinary Department of not effectively undertaking the mandatory disease control activities, dispelling fears of any case of huma infections.

Related Topics:FG tasks farmers on eradication of avian flu
Up Next