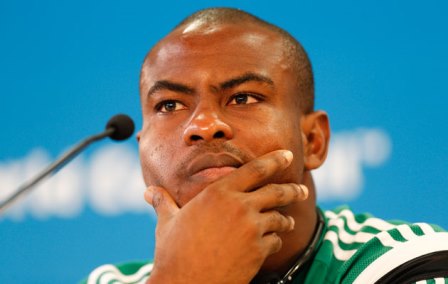 The Lille goalkeeper who arrived camp after Monday’s deadline, having been permitted to report late following Saturday’s burial of his mother, fell out with coach Sunday Oliseh.

Reports indicate that the goalkeeper was shouted down by the coach during dinner as he made attempts to apologise for turning up late and also questioned the reason for his being stripped of the captain’s arm band in favour of Ahmed Musa.

Tempers flared as Oliseh ordered the 101-cap man to leave the hotel before calling on security officials to haul the goalkeeper out.

However, the Nigeria Football Federation stepped in to rescue the situation as the Eagles’ skipper was ordered to remain in camp.

Breaking the silence for the first time since the incident happened on Tuesday evening, Enyeama revealed that he was pained at the insult hurled at his late mother and attempts to throw him out of the camp by security officials.

“After 13 years on national service, having this smiles on my face and this passion in my heart,” Enyeama wrote on Instagram.

“Through the billows, the waves of the ocean, the tears of defeat, the sound of rejoicing from victory chants. Now the thought of being stripped naked and security agents throwing me out breaks me completely.

“I will take anything but not insult to my dead mother,” he concluded.

A month ago, the goalkeeper asked to be withdrawn from the squad preparing in Abuja for the Super Eagles’ Africa Cup of Nations qualifier against Tanzania, only for news to break later that evening that his mother had died.

Why we pass vote of confidence on Saraki – Umaru