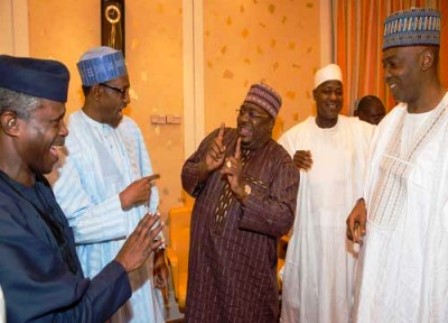 NEWSVERGE gathered that the meeting will allow Buhari familiarise with the lawmakers, especially as he will count on the support of the Senate to confirm ministerial nominees he sent last week

The first official meeting between President Muhammadu Buhari and the leaders of both houses of the National Assembly is underway at the Aso Rock presidential villa.

The Senate President, Bukola Saraki, led principal officers of both Senate and House of Representatives, consisting of 20 members, to the meeting, a reliable source close to one of the leaders of the National Assembly confirmed to this newspaper.

Meanwhile, Femi Adesina, said it was just a “familiarisation meeting” between the president and the lawmakers.

Our source said the meeting was slated to enable Mr. Buhari enlist the support of the leadership of the National Assembly for the 2015 supplementary budget.

Also, the meeting will allow Mr. Buhari familiarise with the lawmakers, especially as he will count on the support of the Senate to confirm ministerial nominees he sent last week, the source said.

Eight members of the opposition Peoples Democratic Party, who occupy the minority positions in Senate and the House will also be at the meeting.

Our source added that the lawmakers converged at the Maitama residence of Saraki who led them to Buhari.

The meeting provides an indication that Messrs Buhari and Saraki may have resolved their differences, following the June 9 Senate leadership election which Saraki won against the wish of the All Progressives Congress (APC).

Saraki continued to face opposition even from his party, and now stands trial before the Code Conduct Tribunal over a 13-count charge slammed against him by the Federal Government.

Last week, the House of Representatives passed a resolution that the Speaker, Yakubu Dogara, should meet with Buhari to find “political solution” to Mr. Saraki’s travails, including his trial.

The same positions from the House make the full team.