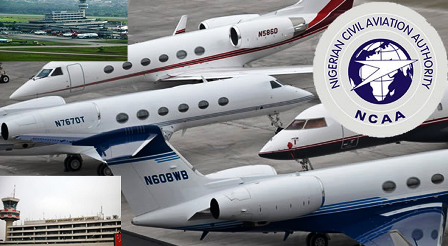 The Nigerian Civil Aviation Authority (NCAA) has announced the release of a Mexican plane grounded for violating the Nigeria airspace.
The Bombardier 700-100 aircraft, with registration number G-RBEN, Global Express S/N 9083, illegally flew into the country without flight plan.
This led to the grounding of the aircraft by the NCAA.
The agency’s General Manager Public Relations, Mr. Sam Adurogboye, said, the airline was fined N7 million paid to NCAA and $20, 000 to Nigerian Airspace Management Authority (NAMA) for violation.
Adurogboye said the aircraft has since been released after the payment of the fine.