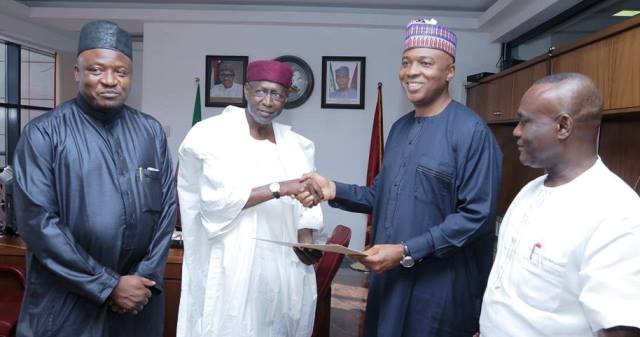 President Muhammadu Buhari, Monday sent the second batch of his ministerial nominees to the Nigerian Senate.

The Senate announced this via its Twitter handle on Monday afternoon.

The Chief of Staff to the President, Alhaji Abba Kyari, who was accompanied by the Senior Special Assistant to the President on National Assembly Matters, Senator Ita Enang and his counterpart for the House Of Representatives, Honorable Suleiman Kawu, handed over the letter to the Senate President at exactly 4:24 pm.

The letter was sealed and would only be opened by the Senate President at the plenary on Tuesday.

The first list of 21 ministerial nominees was sent to the Senate on September 30. 16 names are said to be on this second batch.

In the same vein, Senator Abubakar Bukola Saraki, Nigeria’s Senate President confirmed on his facebook account that he has received the second batch of the ministerial nominees.

According to Senator Saraki, “A few minutes ago, I received the second batch of ‪#‎TheList of President Muhammadu Buhari’s ‪#‎MinisterialNominees on behalf of the Nigerian Senate, delivered to me by Abba Kyari, Chief of Staff to the President and Sen. Ita Enang, SSA to the President on National Assembly (Senate).”

Related Topics:Buhari submits full list of ministerial nominees
Up Next