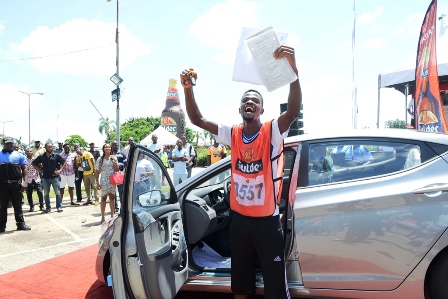 The brand new car eluded Ozoalor, a final year undergraduate twice – when he participated in the Enugu leg of the Gulder Ultimate Chase held on September 26 and at the Port Harcourt edition held on October 3.

The Gulder Ultimate Chase is part of the 2015 Gulder National Consumer Promotion which gives consumers the opportunity of winning a brand new Hyundai Elantra car if they are able to locate a chest which has the car keys. Discovering the chest is no mean feat as they have to overcome physical and mental tasking challenges which include running and making sense of the coordinates on a map.

Speaking on his previous Gulder Ultimate Chase experiences, the University of Nigeria law undergraduate said: “We ran from the Nnamdi Azikiwe Stadium to Okpara Square. I was so close to the car and I was the second person that the Gatekeeper handed over the map to. I was able to trace the location of three boxes. I opened the first two boxes and they were empty; but the guy behind me opened the third box which had the key. That was my experience in Enugu. The very fact that I came close to winning the grand prize made me not to lose hope. I felt that there was something in me that could still lead me to the ultimate prize.”

Charles Ozoalor also stated that he was unlucky in Port Harcourt on October 3. Despite being among the first five contestants to arrive at the Polo Club after the sprint from the Liberation Stadium, he unfortunately read the map upside down which led him to a direction far from the location of the chest which had the keys to the brand new car.

Charles however stated that he did not allow this losing streak to deter him. Instead, it spurred him to attend the Ibadan leg where he eventually emerged the grand prize winner. However, this victory was almost short-lived as he was almost disqualified.

Speaking on his Ibadan experience, he said: “As at Thursday, I was already in Ibadan. I stayed with my friends. When it was time for my medical screening, I was nearly disqualified. My body temperature and heart beat counts were okay. Then the medical team said my blood pressure was higher than expected. So I was asked to stay aside. I was nearly losing hope; I don’t know why my blood pressure was high. But they said it might be due tension. They tested me again after about 10 to 20 minutes they took it again and declared me fit. As usual, I was among the first set of people to run from the stadium to the Trans amusement park. This time around I got the scroll, exchanged it for a map from the Gatekeeper, went searching for the box and found it and won the car.”

Charles Ozoalor stated that he would have gone to other venues where the Ultimate Chase was holding had he not won the brand new car in Ibadan.

He however had words for other contestants who were not successful. He said: “Don’t give up. Life is about 99 per cent perspiration and one per cent inspiration. I had to train harder in order to win this competition. Always work hard.”

Stating that the car had changed his life, he said: “Mobility has always been an important thing in a man’s life. A lawyer needs a car. We all know what the transportation system in Nigeria is like. I will drive the car to school, I will use it to court, I will drive it to the chambers where I will do my attachment; in fact my movement is made easier with this car.”

It was however different strokes for different folks. Ndubuisi Christian Uchendu, the 300 level student of Electronics and Computer Engineering department of the Nnamdi Azikiwe University, Awka has been thrice unsuccessful. He had been to the Enugu, Port Harcourt and Ibadan legs of the Ultimate Chase, but has been unsuccessful.

Speaking on what drives him to keep on contesting; he stated that it had been a learning curve for him. He said: “The Gulder Ultimate Chase is a learning process for me. I keep learning from my mistakes and I keep improving.” He however vowed not to stop competing in the Ultimate Chase until he wins the brand new car grand prize.

To participate in the Gulder Ultimate Chase, consumers have to report at specific venues with six crown corks marked ‘Ultimate Chase’ and compete with other contestants. While the lucky winner will drive home a brand new car, other winners will go home with 200 mouth-watering prizes.

Consumers can also win brand new cars via the electronic raffle draws. To win, they have to send the alphanumeric codes under the crown corks to 20388.