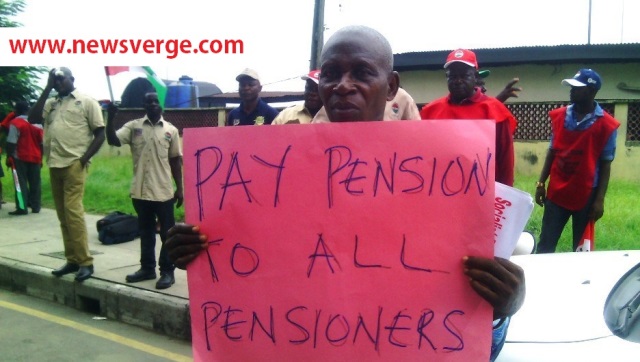 Following prolonged wait for pension benefits in Delta, wife of a pensioner, who retired from the Delta State Civil Service, had packed her children and belongings and disappeared from her retired husband.

The disappearance, it was learnt, was occasioned by the accumulation of two years rent which the husband was unable to pay as a result of the long wait for pension benefit from the Delta State Government.

A pensioner in Delta, Abel Juwah, who spoke with NEWSVERGE in Okpanam, a suburb of Asaba, the Delta State capital, revealed the pains and sufferings pensioners in Delta are made to undergo by the bureaucratic bottlenecks of the Delta State Civil Service.

Juwah, who retired as an Assistant Director from the Delta State Civil Service, told NEWSVERGE that a pensioner from the State Judicial Service Commission had died while pursuing his pension benefits from the state government.

He also revealed that another pensioner, for reasons which could not be ascertained, had gone mentally deranged and picking stones and pebbles along the streets of Asaba.

The Retiree said what is his saviour today is a hotel he built in Opkanam from where he makes little money to pay his children’s school fees and take care of other matters within his family setting.

He told our correspondent that his mates who could not invest prior to retirement are currently weeping while others are envying his investment in his hotel business, though poorly patronized.

According to him, Delta State Government had always said there was insufficient fund to attend to all pensioners, hence the recent fund released by the new administration of Senator Ifeanyi Okowa was meant for the payment of 2011 and 2012 pensioners.

Juwah, who spoke with NEWSVERGE in the enclave of his hotel, said “I went to the office of the Director of Pension in Asaba and I met over 18 pensioners lined up with old coats and small bags and I asked them which year they retired and they said 2011 and 2012, having heard that I had to return because those people were senior to me.

“I decided to remove my mind from it and told myself that any time it comes I take, if it doesn’t come I leave it. That is the condition of the retirees in Delta State.”

He said he attempted to register with the Nigerian Union of Pensioners (NUP) in Delta but said the conditions presented before him were unfavourable to him, hence he could not be part of the NUP in Delta State.

Related Topics:Sorrowtears as pensioners groan in Delta
Up Next