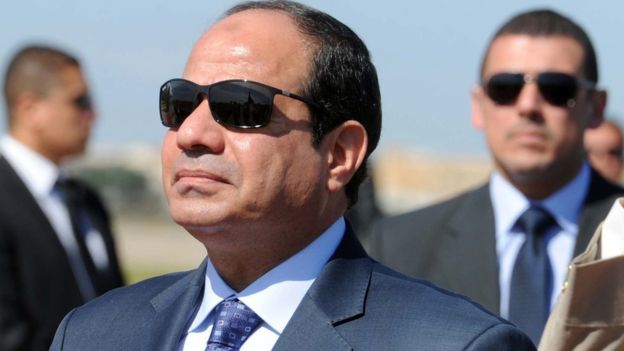 People have been voting in Egypt in the first round of long-delayed elections to choose a new parliament.

They are the first such elections since the previous chamber was dissolved by a court ruling in 2012.

The authorities say the poll is the final step in a transition to democracy.

However, critics say most candidates are supporters of President Abdul Fattah al-Sisi and the new parliament is likely to strengthen his control.

President Sisi is a former general who led the 2013 military overthrow of Islamist President Mohammed Morsi, following months of unrest.

Mr Morsi’s party, the Muslim Brotherhood, won about half the seats in the last parliament but is now banned and its leaders are in jail – some facing death sentences.

By contrast, many figures from the regime of deposed autocrat Hosni Mubarak are on the ballot paper, says the BBC’s Orla Guerin in Cairo.

Voting continues on Monday in this first round of the elections, with a second round due in November. Results are not expected to be known until early December.

Voters are choosing 596 MPs for the lower house, the House of Representatives.

Security has been tightened across the country with at least 185,000 troops supporting police, Egyptian news agency Mena reported.

On Saturday, President Sisi made a televised appeal for Egyptians to vote.

With indications that turnout may have been low on Sunday, it was announced that public sector employees would have half a day’s holiday on Monday to encourage them to take part.

“Line up in front of polling stations and plant with your votes the hope for a bright tomorrow for our new Egypt,” he said.

While the new parliament appears to have broad powers, it is not expected to challenge the president, our correspondent says.

Analysts say turnout is expected to be low, with many Egyptians disillusioned with the democratic process.

Apathy is particularly high among young people, with many angry at the government and its policies.

Related Topics:Egypt to elect new parliament members
Up Next