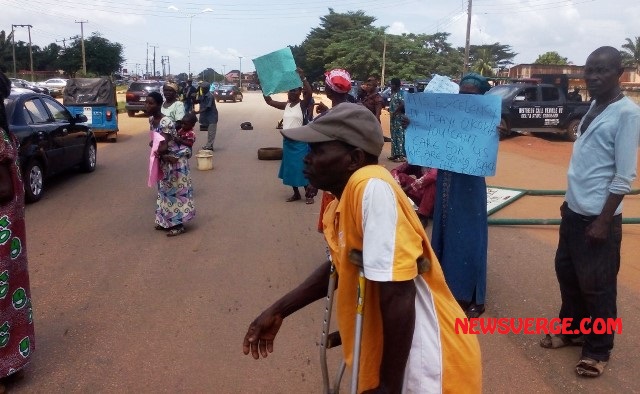 By Austin Oyibode
Protesting lepers from the Leprosy Rehabilitation Home in Eku, an agrarian community in Ethiope East Local Government Area, Tuesday, barricaded the way to the Delta Government House, demanding fair treatment, just as they protested reduction in their monthly stipend from the Delta State Government.

The protesting lepers who carried placards with various inscriptions also barricaded entrance into the state Ministry of Women Affairs and Social Development, the government organ charged with their responsibility in the state.
But rather than continue protesting against the insensitivity to their plight, their restrained movement of vehicles on the highway from the state mini campus of the Delta State University and solicited alms from motorists before making way for them.
A member of the lepers group who volunteered to speak, said their allowance was reduced from initial N8000 monthly during the days of former Governor, James Ibori, to N2,500 by the previous administration but the intervention of the new administration increased their allowance to N3900.
“Ibori built the camp and started paying us N8,000 monthly stipend. He was also feeding us two times every day. Uduaghan came and continued with the practice. It was in 2014 that he decided to reduce the stipend to N6,000.
“Then again, they reduced it to N2,500, and recently they invited our leaders for a meeting where they promised to increase it to N3,900 with a meal daily. But last week they came with N3,000 instead of N3,900 which provoked us. So, we are here to tell them that we will no longer accept the situation,” the volunteer, a young lady, said.
Although the Commissioner for Women Affairs, Mrs. Omatsola Williams, was not on seat during the protest, Special Adviser to Governor Ifeanyi Okowa on Orientation and Social Development, Mr. Eugene Uzum, assured that the issues would be addressed as soon as possible.