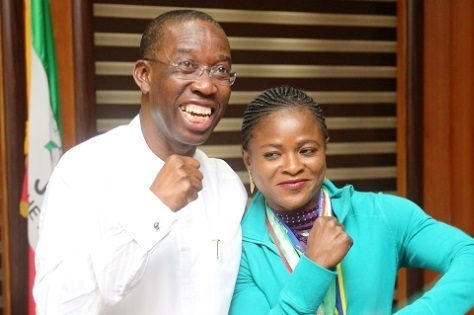 Delta State Governor, Senator Ifeanyi Okowa has stated that his administration would identify and empower hardworking and dedicated youths in building a bright future for themselves.

Speaking when the kickboxing world champion, ASP Lovethpatra Ekufu paid a courtesy visit in Asaba, Senator Okowa explained that his SMART agenda would support the teeming youths of the state to achieve their dreams.

According to him, “This government will support youths that has the zeal and passion to succeed. Having listened to Loveth’s story l believe that she is a role model for our teeming youths who are feeling defeated by life. She had the courage, the commitment and foresight to pursue her dreams believing that her personal loss was not the end of her life and she has worked hard believing that with God and self-will, it was possible to turn things around and when people get committed in that kind of thinking process God will always be with them.”

“On behalf of the people of Delta state and the state government we want to congratulate you on this wonderful showing and we are proud to know that a Deltan is out there putting up the name of the state and the nation.”

The governor disclosed that ASP Ekufu was a role model to many of our teeming youths in the state and would be encouraged to have a forum where she would be able to educate youths with her own life experiences saying “I congratulate you once again and by the time you have won the Olympics gold we will find a way of engaging you to talk to our youths so that they can realize that hope is not lost despite whatever challenges and circumstances life may throw at them, the commitment and will power from within is important. Hold onto God and your passion and I believe that you will be a better success story ahead.”

Governor Okowa then called on Deltans to be charitable and support fellow Deltans that are disadvantaged in life to have a meaningful life.

In a brief response, ASP Lovethpatra Ekufu commended the governor for his empowerment programmes and promised to contribute her quota to promoting sports in the state by doing her best to win medals for the state and country in the 2016 Olympics games.

Highpoint of the visit was the presentation of all the medals and laurels she has won to the governor.

Related Topics:Okowa promises to empower hardworking youths
Up Next