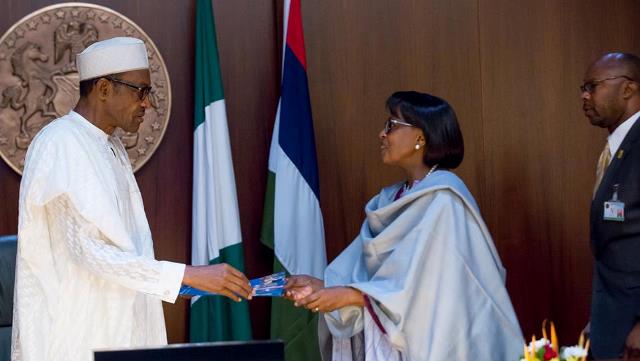 President Muhammadu Buhari on Monday assured that his administration would sustain the current momentum aimed at eradicating polio virus in the country.

He said government would, to that extent, provide the needed funding for operations and vaccine procurement as well as reintroduce the Presidential taskforce in order to provide the political direction.

The President spoke at a brief ceremony at the Presidential Villa, Abuja where he received an official report on the delisting of Nigeria as a polio endemic country by the Worlh Health Organisation (WHO).

The status report was handed to him by officials of the WHO led by the body’s Regional Director for Africa. Dr Matshidiso Moeti who represented the Director General of the organisation, Dr Margaret Chan, in company of Federal Ministry of Health officials.

The delisting of Nigeria from the wild polio virus endemic nations, following one year none discovery of any fresh case, is a precursor to the final eradication and certification of the country as polio-free in 2017.

Buhari said: “I want to assure you that there will be no complacency, as we will maintain and improve on our surveillance system as well as raise the childhood population immunity against the polio virus to avoid any spread of the disease.

“The federal government will sustain the current momentum and we shall continue to regard this campaign as an emergency until we are declared polio free in the next two years.

“I would like to re-interate the federal government’s commitment towards the achievement of a polio free Nigeria in 2017.

“The Government will sustain the needed funding for operations and vaccine procurement for the programme. Also, the Presidential Taskforce on Polio Eradication will be reconstituted under the leadership of the FederalMinistry of Health to provide political direction and oversight in order to.avoid complacency and relapse.”

He said, it was important that the fight against polio and other communicable and non-communicable diseases, was anchored on a strong health system for sustainability.

“The National Health Act has made provision for universal access to basic healthcare with a focus on the poor and the vulnerable as well as the basic healthcare privision funds to support its implementation.

“I have already instructed the Federal Ministry of Finance to provide for the basic healthcare provision fund under the 2016 Budget. We are also working on a revised National Health Policy which would have the achievement of Universal Health Coverage as its main ultimate goal,” President Buhari added.

He said the Health Sector under this Administration was also concerned about addressing the significant morbidity and mortality rates caused by neglected tropical diseases.

“These diseases disproportionately affect the poor and the vulnerable and as such are major concerns of this Administration,” Buhari noted, adding that;

“We shall ensure that these diseases are no longer “neglected”.

In an address before handing the report to him, Dr Moeti while congratulating the country for being delisted, noted that the road to final eradication of the virus was still a long one.

She disclosed that a conference for African ministers on immunization was being planned to take place soon as a way of ensuring that there was no room for complacency.

Related Topics:Buhari promise to sustain Polio eradication momentum
Up Next