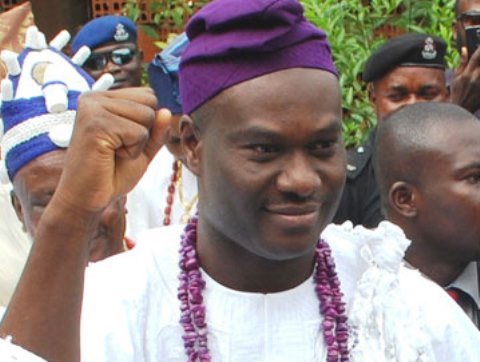 The ancient city of Ile Ife was for several hours Wednesday stood still for the Ooni designate, Prince Adeyeye Eniitan Ogunwusi, who made a triumphant entry into the town for the first time since he was pronounce as the 51st Ooni of Ife by the Osun State government.

His arrival in the town signified the commencement of his installation rites in Ilofi where he will spend the next 21 days.

The Ife however erupted in wild jubilations as Ogunwusi, entered the town in a motorcade of about 100 vehicles and rode in Bugatti 2015 model car.

Commercial activities in the ancient town also grounded as shops and commercial banks were closed to customers.

The new Ooni who was decked in white lace material with purple cap and beads, Oba Ogunwusi, continuously acknowledged cheers from the excited crowd, who had trooped out as early as 7am to catch glimpse of him.

The new Ooni, who was received at Ajebanbele, Ife toll gate of Ife/Ibadan express way made it to the venue where ceremonial formal hand over by his family to the palace chiefs was performed at around 2:30 pm.

Ooni designate, Prince Adeyeye Enitan Ogunwusi, acknowledging cheers from the crowd on his arrival to Ile-Ife

Accompanied by friends and close relations, sources said the monarch took off from Monatan house of an elder of Giesi Ruling House few minutes past 11 and started the journey to Ife.

He was received at Asejire boundary of Osun and Oyo states by members of Giesi Ruling House and had another stop over at Sasa River where he performed the first traditional rite.

At Sasa River located at the border of Ife and Ibadan, Oba Ogunwusi, as parts of rites before entering town, came out of his vehicle and trekked across the river.

Upon arriving at toll gate, Oba Ogunwusi, greeted his father, Prince Ropo Ogunwusi and was led by Prof. Adekanye Aderibigbe, to the high chiefs led by Lowa Adimula, Oba Joseph Ijaodola, and had a brief discussion before proceeding to Obalufe of Iremo’s palace where he observed spiritual feet washing.

He later moved to his family compound in Agbedegbede Area, where he was installed as Sooko of Giesi in fulfilment of demands of Ife tradition.

After his installation as Sooko, which was witnessed by the former president, Chief Olusegun Obasanjo and Otunba Oyewole Fashawe among others, Ogunwusi proceeded to Igbo Oro where more traditional rites were performed.

He is expected to end the day at Ilofi to begin the rites that will last for 21, days before he will be installed with the Obadio, the leader of Isoro Cult taking charge of his rites of installation.

And from now, the people of Ile-Ife, Yoruba race, and the entire Nigerians have begun the counting of the 21 days.