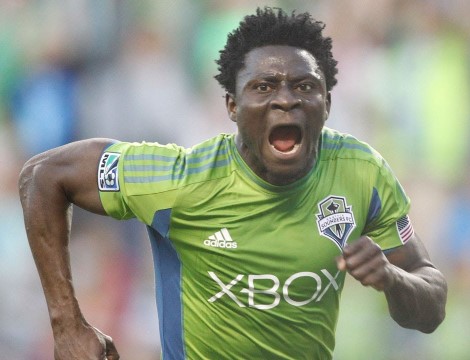 Nigeria head coach Sunday Oliseh has invited Obafemi Martins back into the international fold after a two-year absence to prosecute the November 13 Fifa World Cup qualifier against Swaziland.

The Seattle Sounders striker has been in fine form for his Major League side this season and those efforts seem to have paid off as he is back into the Super Eagles set-up.

Twenty-three players have been invited to camp in a list that has the usual suspects like Ahmed Musa, Carl Ikeme who is now the first-choice goalkeeper, Godfrey Oboabona, Ogenyi Onazi and Moses Simon.

There is also an invite for Enyimba’s exciting prospect Ezekiel Bassey as well as Wilfred Ndidi who was a late call-up for the Cameroon and DR Congo friendlies earlier this month.

Efe Ambrose and Elderson Echiejile are also retained from the squad that executed the friendlies in Belgium last month.