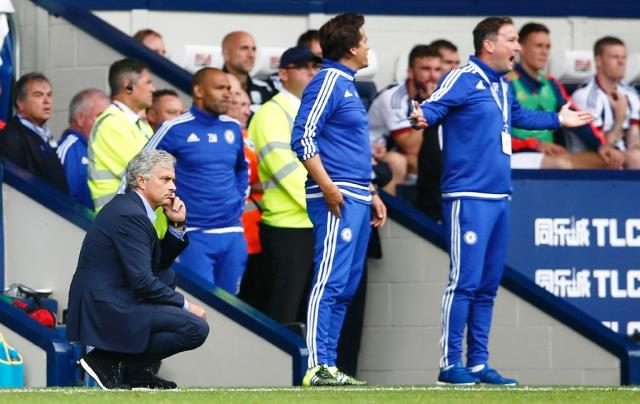 Amid Chelsea’s ongoing troubles, John Obi Mikel maintains Jose Mourinho is the man to turn results around at Stamford Bridge.

Mikel was part of the Chelsea side beaten 3-1 at home by Liverpool on Saturday as their dismal title defence continued – Mourinho having come under intense pressure after six defeats in 11 league outings.

Four points from three Champions League games and a League Cup exit at the hands of Stoke City have added to Mourinho’s difficult campaign, with reports suggesting an element of unhappiness in the Chelsea dressing room.

But Mikel told reporters: “We are right behind the manager. There’s no doubt about it.

“In training we work very hard. If anyone can turn this around, we definitely think [Mourinho is] the one. Last year we were champions. We won two trophies. Jose knows this club more than any other manager. He’s the most successful manager in the club’s history.

As speculation regarding Mourinho’s future continues to swirl, former Chelsea bosses Guus Hiddink and Carlo Ancelotti are said to be targets over a short-term return to the club.

However, Mikel maintains any desire to see an end to Mourinho’s second reign at Chelsea comes from outside the dressing room.

“There’s no one out there that is going to come in and fix what’s going on,” he added.

“He has come out a few times and said the players are not giving 100 per cent and then you look at the next few games, the players come out and play better.

“He is doing everything that needs to be done. It’s just that right now things aren’t going well, so everyone [outside] wants him to go. I don’t think it’s the right way to go.

“I think that inside that dressing room we definitely believe he is the man to change things. He knows this club in and out. He knows what’s wrong and it’s just a matter of time before results start coming.”

Related Topics:Mikel: Mourinho is the man to fix Chelsea
Up Next