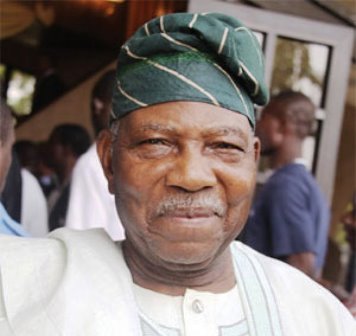 ‎Some leaders of the pan-Yoruba socio-political group have begun consultation over the resignation of Pa Reuben Fasoranti, its Chairman on Sunday.

Our correspondent gathered on Monday that the leaders have concluded plans to meet the erstwhile Chairman to rescind his decision.

It was gathered from the group’s Secretary General, Sehinde Arogbofa, that the leaders were planning to have a meeting over the sudden development which has thrown its members and sympathizers into confusion.

Impeccable sources told journalists that some grou‎p of leaders visited the elder statesman at his Fiwasaye residence in Akure but they could not have access to the octogenarian.

The source added that the ‎excuse was that Pa Fasoranti was relaxing inside his private living room as some of his aides also barred visitors from entry the expansive compound.

Leaders of the organization including Chiefs Olu Falae and Sehinde Arogbofa who are both indigenes of the state and close associates of Fasoranti have also been trying to reach out to him.

Also, it was gathered that the Ondo state Governor, Dr Olusegun Mimiko who received the news of Fasoranti’s resignation with surprise may meet with the elder statesman before the end of the week.

Although, Afenifere has not met to accept the resignation of Falae, it was gathered that an emergency meeting of the organization may hold before the end of the week.

Fasoranti who emerged the Leader of Afenifere following the death of Chief Abraham Adesanya announced his resignation as Leader of the organization through a letter on Sunday.

He cited alleged disloyalty of members as the major reason why he resigned as the leader of the organization.

The Secretary General of the organization, Chief Arogbofa who spoke on telephone said “Afenifere is an organization made up of intelligent people. We cannot rush to action in this kind of a situation. We are still consulting and I will inform you the outcome of our consultation.”

He informed that some leaders of the organization will soon meet with Chief Fasoranti Justas he informed that “we were shocked by the action, because baba never discussed with me before he took his decision, despite the level of our closeness.”

“I don’t know why he decided to resign, because he was still functioning well as Afenifere Leader. I dont know what he meant by disloyalty of members because he didn’t discuss with me before he took his decision,” he added.

Related Topics:Fasonranti: Afenifere leaders in search of new chairman
Up Next