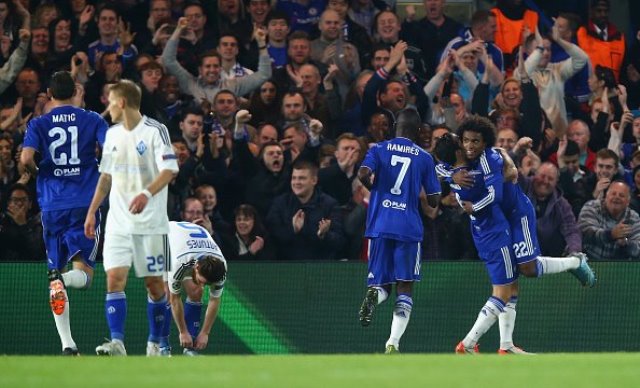 Arsenal’s hopes of reaching the Champions League knockout phase were left hanging by a thread on Wednesday after they were thrashed 5-1 by Bayern Munich, while Chelsea revived their faltering campaign with a nervy 2-1 victory over Dynamo Kiev.

Zenit St Petersburg became the third team to reach the last 16 of the competition as the Russian champions maintained their 100 per cent record with a 2-0 win at Lyon, while Barcelona edged closer towards qualification after strolling past BATE Borisov 3-0.

Bayern’s unbeaten start to the season was ended by a 2-0 defeat at Arsenal a fortnight ago but Pep Guardiola’s side exacted revenge and then some at the Allianz Arena.

Thomas Mueller added a second just before the half hour as his shot deflected off Per Mertesacker and crept in at Petr Cech’s near post.

David Alaba effectively put the game beyond reach just before the break as the Austrian curled home a third after stealing the ball from Santi Cazorla on the edge of the area.

Substitute Arjen Robben then smashed home an Alaba cutback early in the second half while Olivier Giroud’s acrobatic effort pulled one back for the Gunners.

But Mueller compounded Arsenal’s misery a minute from time to condemn the Gunners to their joint-heaviest European defeat, equalling the 4-0 drubbing at AC Milan in the last 16 of the 2011/12 edition.

A chastening evening for the Londoners was made all the more damaging as Olympiakos recovered from a goal down to beat Dinamo Zagreb 2-1, leaving Arsenal six points behind the Greeks, and Bayern, with two games to play.

Meanwhile, beleaguered Chelsea coach Jose Mourinho was a much-relieved man after Willian helped steer the Blues past their Ukrainian opponents.

Chelsea took a first-half lead at Stamford Bridge when Willian’s right-wing cross was headed into his own net by Aleksandar Dragovic, only for the Austrian to atone with a 78th-minute equaliser.

But Willian curled in a superb free-kick seven minutes from time to hand the hosts all three points and bump them up to second in Group G, two points above Kiev.

Porto remain top of the section after easing to a 3-1 win away to bottom side Maccabi Tel-Aviv – Cristian Tello, Andre Andre and Miguel Layun all on target for the Portuguese outfit in Israel.

Neymar netted a 31st-minute penalty and added a late second with Luis Suarez also grabbing a goal at the Camp Nou as Barcelona cruised past BATE Borisov to leave the holders five points clear atop Group E.

Roma prevented Barca from qualifying with two games to spare as the Italians recovered from letting a two-goal lead slip to beat Bayer Leverkusen 3-2 and climb to second.

First-half strikes from Mohamed Salah and Edin Dzeko put Roma in control at the Stadio Olimpico but, just like in their previous meeting in Germany, Leverkusen fought back with goals from Admir Mehmedi and Javier Hernandez just after halftime.

Miralem Pjanic’s penalty 10 minutes from the end proved the difference though as Rudi Garcia’s side picked up their first victory of the campaign.

Artem Dzyuba netted twice to power Zenit past a listless Lyon at the Stade Gerland as the Russians joined Real Madrid and Manchester City in the last 16, while Gent kept their qualification dreams alive in Group H with a 1-0 home win over second-placed Valencia. (AFP)