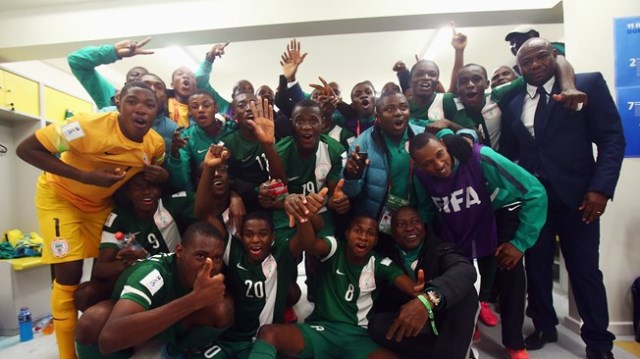 Nigeria’s Golden Eaglets have qualified for the final of the 2015 Fifa U17 World Cup following a 4-2 victory over Mexico in Estadio Municipal Ester Roa, Concepcion.

But the Under-17 head coach, Emmanuel Amuneke, said he is expecting “an interesting challenge” against Mali in this Sunday’s all-African Fifa Under-17 World Cup final.

Mexico took the lead early when Kevin Mangana struck in the seventh minute to send the champions into shock.

Emmanuel Amuneke’s charges are however made of stern stuff and they were back on level terms when captain Kelechi Nwakali fired home a free kick of the highest quality into the bottom corner in the 35th minute.

Two minutes before half time, Nigeria were in front for the best time in the game when Orji Okonkwo scored a wonderful goal that cannoned in off the post.

The game continued to ebb and flow with Mexico back on level terms when Diego Cortes scored a remarkable goal that would have had Diego Maradona applauding.

He picked up the ball just inside the Nigerian half before proceeding to leave no less than five Eaglets in his wake via deft control, pace and poise before firing home past the Nigerian goal keeper, Udoh Akpan.

Nigeria was however to have the last laugh with Osinachi Ebere and Victor Osimhen netted late on to complete a richly-entertaining victory.

The Golden Eaglets will now face Mali in the final on Sunday.

This was after the Malians came from a goal down to overcome Belgium 3-1 in the day’s first semi-final.

Amuneke, said reaching the final of the under-17s tournament for a second successive time offers his country the chance to defend the title they won two years ago in the United Arab Emirates (UAE).

The former Nigerian international who was part of the coaching setup in UAE in 2013, acknowledged that the Malian are “a good team” since they are African champions.

“It was a difficult match in which both teams did their best. We give credit to Mexico because of their performance and its level of play. We are happy to be in the final and have the chance to defend the world title. Mali is a good team, Africa’s champion. This is going to be an interesting challenge,” said Amuneke at the post-match.

Can Nigeria expect investment boom in its mining sector?