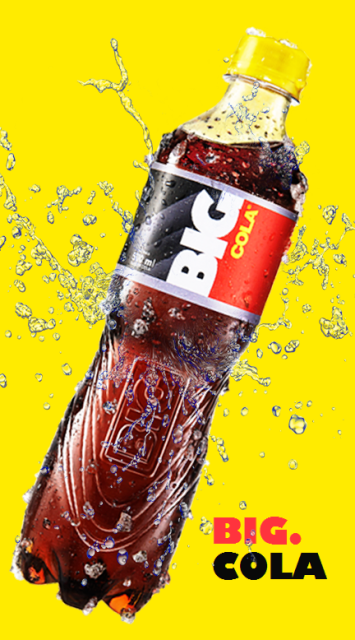 When a new entrant comes into a competition with established players, it often comes with a lot of hubris and razzmatazz. Soon enough reality sets in that the race is not a sprint but a marathon. Perhaps this is a lesson that the AJE group – owners of Big Cola – needs to take into cognizance as it makes its entry into the dynamic Nigerian market of carbonated soft drinks, where Coca-Cola and Pepsi have held sway for decades.

According to an article in Financial Times, a combination of low-cost operating strategy and clever marketing has enabled AJE make inroads in some markets in Latin America and Asia. This could be an interesting time for all players and the consumers will no doubt gain from the firework that is sure to follow.

The launch, the message
With a clear message ‘You think Big, You drink Big’, which serves as pay-off, AJEAST Nigeria Limited, a unit of AJE Group, a multinational beverage company, recently entered the market with varieties -big cola, big orange and big lemon.

With its footprints in over 20 countries of the world and as an official England promotional partner, including the FA Cup and Barcelona, handlers of the brand are confident that it would succeed in Nigeria.

Speaking at the launch, which was held in Agbara area of Ogun State, the Country Manager of the company, Mr. Theo Williams, said, “The focus is about consumers, AJE in Nigeria is to offer ‘big’ for everybody, we are giving more for less. We want to ensure that consumers get something affordable that they can share with families and friends.

“We are on a line, where we produce the bottles; we do the wrapping and packaging. Our aim is to offer more for less, while other soft drinks of 50cl are being sold for N100, we say no, giving 15cl so that consumers can see the benefit. We will introduce new brand every three months.”

Williams added that the unique selling model the company had adopted with regards to pricing in Nigeria is to ensure that the group has the ability to monitor the consumer price. He also pointed out that the company has capacity to its budgeted consumer in the next six months.

He put their investment at N5billion, saying it is expected to be in operation in Cameroon in July 2016, while negotiations are still ongoing in other African countries.

The big question for Big Cola, however, is whether its promoters will be able to compete sustainably in Nigeria? However, as people say in this part of the world, time will tell.
Other questions on the minds of most analysts are: what chance does Big Cola have in a market in which the global giants mainly Coca-Cola and to some extent Pepsi reign supreme?  Would a cheaper price-tag be the propeller for Big Cola’s potential growth in the Nigerian Market? The answer is certainly dicey for now, especially in a market that is predominated by traditional trade.
Big Cola has got its work cut out!  Even with their price penetration strategy, it would face a tough challenge.

The first big lesson that Big Cola needs to take seriously is the fact that Nigerian consumers are exposed and aspirational, including those at the bottom of the pyramid. They are not easily swayed by any product or service that aims to fascinate rather than satisfy their refined taste and quest for brands with strong appeal.  Most Nigerians may be poor but they have a high aspiration that gives them a strong sense of entitlement to quality.  So, while under the burden of necessity, they may endure a “cheap article”, their eyes and hearts are set upon the real thing, their preferred products or brands.

Quality products will always resonate with consumers, and repeat purchase is inevitable once that is guaranteed.  That is what a company like Coca-Cola has enjoyed over the years, having gained a public perception as the quality benchmark for soft drinks. Will Big Cola pass the taste and quality tests long enough to win over the Nigerian consumer?

The second big lesson for Big Cola is that the Nigerian consumer is sophisticated and cannot be sustainably wooed with showiness and propaganda. In other words, you cannot pull wool over their eyes only for a short while. ‘Big talk’ is good for psychological and religious motivations that have no price tag, but not for selling a product that a Nigerian has to pay for with his or her hard earned money, and especially not when the consumers are already in a decades old love affair with trusted brands like Coke and Pepsi.

But if handlers of Big Cola are indeed sincere in their approach as presented during the launch, then it will be another war in the industry. Again, the brand may end up winning the loyalties of some consumers and puncture the huge market share of the giants in the market.

Reading the PR media blitz on its recent launch event, one gets the feeling that Big Cola probably needs to tone down its hubris and talking-down competition, and focus on how it can, like Coke and Pepsi, build exciting and enduring connections with consumers. Unfortunately for Big Cola, that wily wizard of marketing only recently raised the bar too high with its Share a Coke campaign that numbed all other brands.

The third big lesson for Big Cola is that it has a long way to go in building the level of social footprints and equity that Pepsi and especially Coke have built over the years. Nigeria is a poor country, and connecting with consumers must go beyond products and marketing. Companies must demonstrate social responsibility through their business conduct and through investing in causes and programmes that impact the sustainable development of their communities.

As Big Cola seems intent on sparking off a Cola War in Nigeria, one wonders whether this is a David confronting Goliath or the case of a drunken man prodding a napping lion. Whatever the case, may the consumer win big time!

Raheem Akingbolu writes on the competition in the carbonated soft drinks market and the hurdles before Big Cola, the new entrant into the market

Related Topics:Some big lessons for Big Cola By Raheem Akingbolu
Up Next