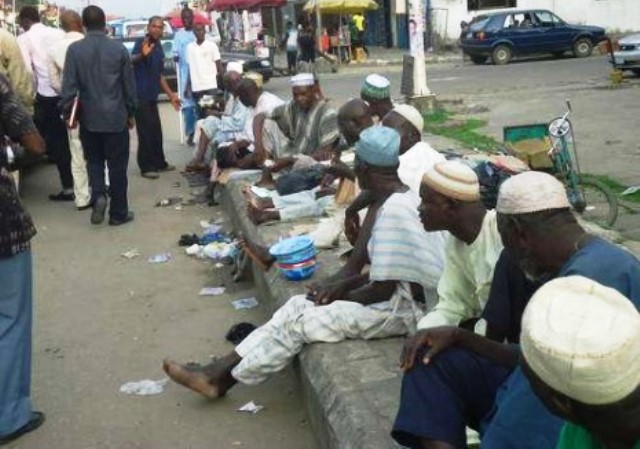 No one can deny the ambience of peace that characterizes Ilorin, the capital of Kwara State. This singular reason has been a great carrot for attraction of settlers of different origin and nativities in the metropolis to the extent that the state prides itself as the “State of Harmony”.

Beggars on the Street of Ilorin

But sadly in recent times the scourge of beggars may blight this good virtue of the ancient metropolis if nothing is done urgently by the authorities to stem the tide. Everywhere one turns to in the metropolis, you see beggars doing their business as individuals or sometimes in groups.

Accepted that the mix cultures in the metropolis had in the past made it vulnerable to beggars most of who were from a certain region of the country where it is believed that the popular religious injunctions support begging. But the disquieting development now is that the begging business seems to have become so alluring that it now has no respect for tribe or race anymore.

Aside from the roads, the social menace is worst in motor garages and social gatherings where the beggars oftentimes go to the extent of verbally assaulting those who refuse to give alms to them.

This writer reliably gathered that anyone contemplating a social event in the town now must make serious arrangements for stern looking security operatives to checkmate the incursion of these misfits. A story was recently told of a beggar who defied the crowd of well- wishers to move over to the podium or what is popularly referred to as the “high table” to beg for alms from a newlywed.

What puzzles one further is the fact that most of the beggars are physically sound and well, defeating the theory that it is only acceptable for the physically deficient to beg for alms. There had been several reasons hazarded by social scientists for the repulsive act.

While it is believed that illness leading to physical, mental and emotional incapacity and lack of material well-being are likely reasons for begging, it has also been argued that laziness, greed and spiritual destitution manifests in insatiable crave for begging. How else would one relate with the life story of a young upwardly mobile man who saw to it to ensure he took care of his aged mother by building her a befitting house and purchased for her two grinding machines to yield daily income for her.

When it was time for the young man to get married, he decided to take the fiancé home for the usual familiarization prior to wedding. However, the young man decided to have a stopover at a social event being organized by a bosom friend in the metropolis.

Barely had they settled to be served than he saw a band of beggars heading towards his direction. Lo and behold, he discovered that the aged woman leading the band of beggars was his mother. The young man broke down in tears uncontrollably and in tears asked his friends “what else does this woman want from me, in spite of all that I have struggled to put together to ensure her sustenance. Here she is letting me down” he retorted!

This story underscores the fact that the causal factor for begging may not be restricted to lack alone, but it may be psychological.

But whatever reason is adduced for this growing social menace, it must be noted that it is the responsibility of the Kwara State government, like those of other states with similar challenge to combat the menace from ballooning further into a culture or life pattern.

For those that are genuinely invalid, the government should through the Ministry of Social Development intensify efforts for their rehabilitation. It is also advisable that governments embark on a massive public reorientation to disabuse those who indulge in it, emphasizing that the act is lacking in dignity, which is the most pivotal essence of human existence.

‘Tope Adaramola, is a Public Relations practitioner of Kwara Origin

Fayose to Fayemi, Use your position for commercial exploitation of Ekiti

Dangote, others flag off nationwide campaign on cooking gas