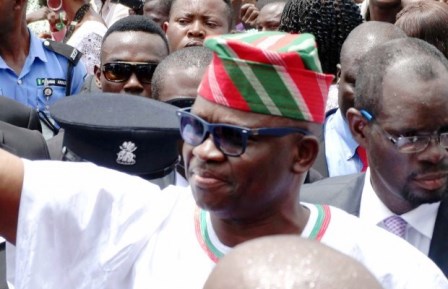 Following the furore that was generated in Ekiti over the introduction of new tax regime by Governor Ayo Fayose, the Governor has concluded arrangements, to woo both the professionals and clerics in the state in a bid to help him convince the concern people of Ekiti state on the need for them buy his idea on this issue.

He explained that his desperation on the new tax regime was to increase the revenue in the State, pointing out that “A total of N900 million is being deducted from the allocation monthly. And a situation whereby our government is to be operating on a monthly allocation of a little over N1 billion calls for us to look inward and the new tax regime is one of our finest way to get out of this situation.

Speaking in Ado Ekiti during a parley with Igbimo Ure Ekiti, an apolitical Ekiti professional body, Fayose said available records show that schools being held by missionaries, had consistently be leading in every public examinations in recent past.

He said his administration is incurably committed to the construction of an ultra-modern Oja Oba Market, Airport and fly over in Ado Ekiti capital city, in spite of the paucity of funds confronting the State.

Responding, the president of the group and former Minister of Health, Mr Julius Adelusi-Adeluyi, assured that the body would continue to play apolitical role and support the government to attract development to the State.

“We are professionals across all fields. We can effectively leverage on our connections to attract investors to Ekiti for more development in infrastructures and in other areas.

“We are really pleased by the governor’s stand to change indiscipline among our people. It is our right to support the government and this we will continue to do being part of our passion to develop the State in all facets”, he stated.

Tension in UI over appointment of new Bursar