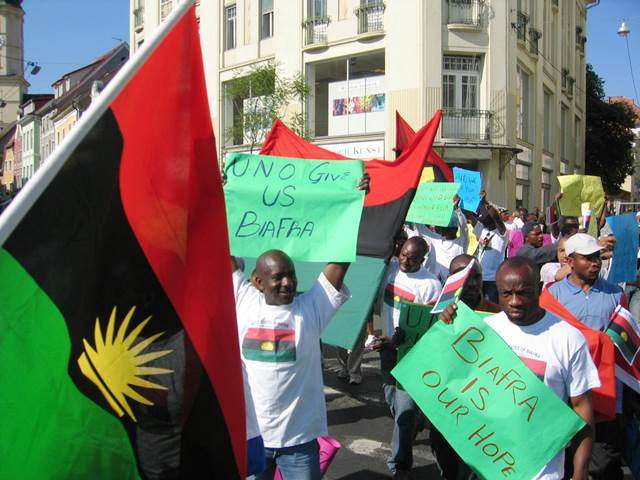 Air Marshal Sadiq Abubakar, Chief of Air Staff, on Thursday, read the riot act to those calling for the exit of Nigeria’s south-east and parts of the south-south to form an independent nation of Biafra; an indication that the Nigerian military appears to be losing its cool with young pro-Biafra agitators.

Relying on the military Rule of Engagement for internal security operations, Abubakar warned that the armed forces is empowered by the constitution to suppress what he described as insurrection or civil disobedience.

He added that the military has the responsibility to restore order when called upon to do so by the President and Commander-In-Chief of the Armed Forces.

The implication of this, according to him, is that troops have to use necessary force to quell crisis of this sort.

“For the avoidance of doubt, the military’s Rule of Engagement sets out the circumstances and limitations under which the military can enforce laws under situations of unrest, agitations and civil disobedience,” he said.

Air Marshal Abubakar added that should the military be provoked, it will definitely protect the sovereignty of the country, warning the Biafran agitators to stay advised.

The Nigerian Army has also cautioned citizens in the country against attempts seeking the disintegration of Nigeria.

The acting Director of Army Public Relations, Colonel Sani Usman, while addressing newsmen in Damaturu in company of the Chief of Army Staff, Lieutenant General Tukur Buratai, also reminded Nigerians of the Rule of Engagement for internal security operations.

General Buratai was in the Yobe State capital as part of efforts aimed at subduing the dreaded Boko Haram sect in Nigeria’s north-east region.