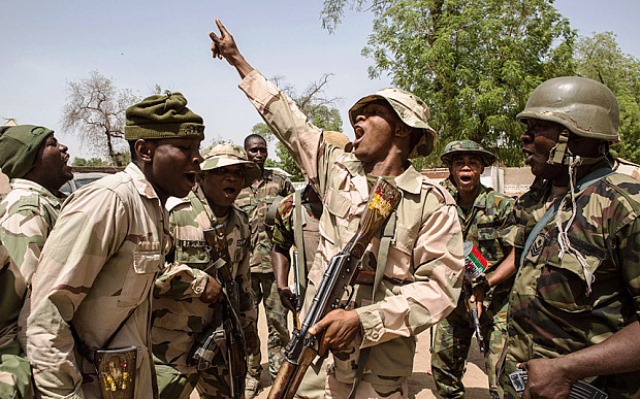 The Nigerian Army has cautioned citizens in the country, be it group, community or individual, against any attempt seeking disintegration from the one indivisible entity called Nigeria.

Addressing newsmen in Damaturu in company of the Chief of Army Staff, Lieutenant General Tukur Buratai, the acting Director of Army Public Relations, Colonel Sani Usman, reminded Nigerians of Army Rule Of Engagement (ROE) for internal security operations.
General Buratai who was in the Yobe State capital as part of efforts aimed at subduing the dreaded Boko Haram sect in Nigeria’s north-east region vowed that the security agency will apply ROE to the fullest if any group or individual failed to hid the warning.
Colonel Usman said, “The Nigerian Army would like to send an unequivocal warning to all and sundry, more specifically to all those threatening and agitating for the dismemberment of the country, committing treasonable felony and arson, as well as wanton destruction of lives and properties that once deployed, we shall apply the ROE to the letter.
“It is however, hoped that such circumstances would not arise that we should be deployed on such operations, because let nobody make any mistake, within the ambit of the law, we shall apply the ROE to the fullest,” Colonel Usman said.
He also informed the public that officers and men of the Nigeria Army had equally been cautioned not to take sides in any conflict, but should work objectively in the interest of the country.
“The public is hereby informed that officers and soldiers have been warned not to take sides in any conflict and if found wanting would face the consequences of their actions. Any officer or soldier found aiding or abetting any act of arson, vandalism or unprofessional conduct, would be severely dealt with according to the extant laws,” the Army spokesman said.
The ROE, according to him sets out the circumstances and limitations under which force may be applied to achieve military objectives in furtherance of government policy and once deployed on any internal security, it is the duty of an officer or soldier to ensure the enforcement of law and order in conjunction with other security agencies for the restoration of peace.
The troops, he says “are duty bound to intervene in any situation to avoid a breakdown in peace, stability or law and order of an area where they are deployed”, pointing out that it is inexcusable for troops to stand aside and watch the security situation deteriorate leading to loss of lives or damage to property without intervening.
Colonel Usman also said “Such intervention should be strictly based on sound judgement and within the ambit of the code of conduct for Internal Security Operations while exhibiting good professional ethics”.
He listed the Rule Of Engagement to include; the application of the Principle of Minimum Force and Proportionality at all times, while every reasonable effort would be made to control the situation through measures short of using force, including personal contact and negotiations whenever operational situation permits.
Colonel Usman also maintained that the use of lethal force would only be resorted to if all other means to control the situation had failed, or in case of unexpected attack or suspected Improvised Explosive Device (IED) attack during which a delay could lead to loss of life or serious injury to personnel among others.
He warned the people to comply, reiterating that fire would only be opened as a last resort as a measure to avoid collateral damage.

Related Topics:Army warnsPro-Biafra/Boko Haram: We’ll apply ROE to the fullest if…
Up Next