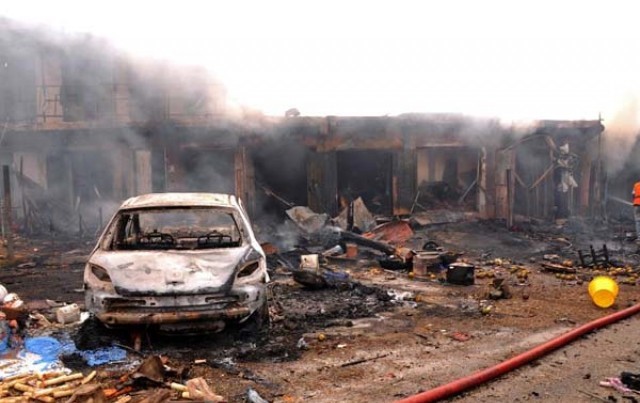 According to an eyewitness, revealed that one of the bombs went off inside the Farm Centre mobile phone market, and the other at the entrance.

No-one has said they are responsible but militant Islamist group Boko Haram has previously targeted Kano.

On Tuesday, more than 30 people were killed by a suicide bomber in the north-eastern Yola city in an attack blamed on Boko Haram.

President Muhammadu Buhari has however condemned the Kano and Yola states’ barbaric attacks.

Six people were said to have arrived at the scene but two got out of their vehicle and four left before the explosion.

In July Kano was attacked by a female suicide bomber who blew herself up outside a mosque killing herself and injuring another person.

A more deadly attack in November 2014 killed more than 100 people at the central mosque.

Nigerian officials say many girls are forced to become suicide bombers, and are told that if they refuse they will be killed.

The Global Terrorism Index says 6,644 deaths were attributed to Boko Haram in 2014, making it the world’s deadliest militant group.

On Tuesday, President Buhari ordered the arrest of his predecessor’s security adviser, for allegedly stealing some $2bn (£1.3bn) meant for military equipment.

Nigerian soldiers have complained that despite the military’s huge budget, they were ill-equipped to fight Boko Haram.

Although the military has this year retaken most of the territory the group had captured. (AFP)