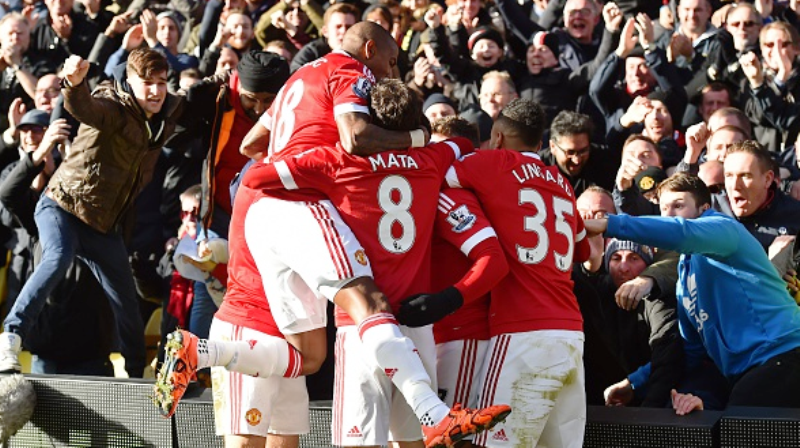 Troy Deeney, Watford captain experienced the highs and lows of football in quick succession after his stoppage-time own-goal gave Manchester United a 2-1 win at Vicarage Road on Saturday.

Deeney had powered home an 87th-minute penalty after Marcos Rojo had brought down Odion Ighalo but was left with his head in his hands after deflecting Bastian Schweinsteiger’s effort into the home side’s net.

Victory took United to the top of the English Premier League table, although cross-town rivals and previous leaders Manchester City were one of several teams who had the chance to leapfrog them in matches kicking-off later Saturday.

This win also meant Louis van Gaal’s side extended their unbeaten run in all competitions to eight games.

United had led early through Memphis Depay before Deeney’s goal ended a record of 10 hours and two minutes without conceding.

In common with all Premier League matches this weekend, the French national anthem La Marseillaise was played prior to the kick-off following the Paris terror attacks of November 13.

This was well observed although some United supporters sang “Ooh ah Cantona” to the tune, referencing their former French forward Eric Cantona.

United manager van Gaal did not include any out and out forwards in his line-up, with Wayne Rooney absent through illness.

That meant Dutch winger Depay led the line, with compatriot van Gaal looking on as his side dominated the opening exchanges.

The visitors were ahead with just 11 minutes on the clock when Depay met an exquisite Ander Herrera cross to volley past Heurelho Gomes for his fifth goal of the season.

Watford struggled to get out of their own half but United nearly gifted them a way back in with former Vicarage Road favourite Ashley Young, who had been given a good reception before kick-off, losing the ball to Etienne Capoue who in turn fed Ighalo. But the Nigerian took too much time and fired wide.