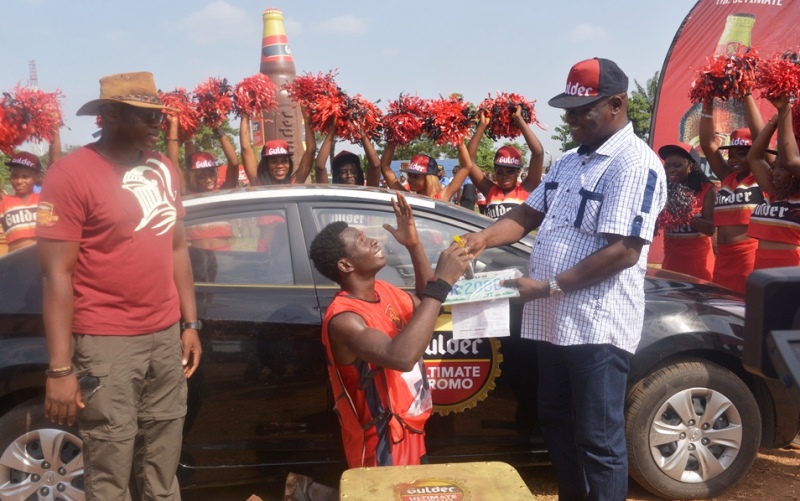 Gulder lager premium beer, manufactured by Nigerian Breweries Plc, has made good its promise of giving out 15 brand new Hyundai Elantra cars to lucky consumers in the 2015 edition of the Gulder national consumer promotion.

The 15th brand new Hyundai Elantra car was won by Ayobami Ogundeji, a 35 year old hair dresser from Osun State. Incidentally, it marked the first time a female would win a car in the Gulder Ultimate Promo as the 14 previous brand new Hyundai Elantra cars had been driven away by men.
Mrs. Ogundeji emerged the star prize winner at the last electronic raffle draw of this year’s edition of Gulder national consumer promotion which was held at the Sweet Garden Bar in Onitsha, Anambra.
The highly elated wife and mother stated that she was shocked when she received the phone call informing her of her good fortune.
She said: “When I received the call that I was the winner of the brand new Hyundai Elantra car, I did not believe at first. It was after I was informed that I won the car courtesy of the Gulder Ultimate Promo that it dawned on me that it was genuine. It has been celebration galore in my house with my husband and my children ever since I received the good news.”
Ogundeji, who also sells beer, said she learnt about the consumer promotion from her customers who helped in sending the alphanumeric numbers under the crown corks to the stipulated Gulder short code.
She said: “My customers told me that Gulder was giving loyal consumers of the brand the opportunity of winning fabulous prizes, including a brand new car. They were the ones who helped me to send the crown cork codes to the stipulated Gulder short code. I sent more than 13 crown cork entries with my phone. Even though I didn’t expect to win anything and despite the fact that N10 was being deducted per SMS, I did not mind. I kept on drinking Gulder and I continually asked them to keep sending the codes.”
Ogundeji stated that the car would greatly turn her life around.
She noted: “My husband is a driver. He owns a bus and a car. These vehicles are for commercial use. I will park this car in front of my shop so that anyone passing by will see the joy that Gulder has brought to my life. The car is for me.”
Other winners who emerged at the raffle draw were Thlama Buba and Ejike Okelom who won N200,000 and N100,000 cash prizes respectively; while Ugwoche Uroko won a television set. Aloysious Aiyebelehin and Vandi Musa both won N50,000 shopping vouchers while Ifeanyi Okonkwo and Gency Bature both won home theatres.
David Louis and Tochukwu Aruah both won refrigerators. Christian Obinna and Christiantus Eyo won 2.5 KVA generators.
The previous day, Esedi Joe David, a graduate of the University of Port Harcourt, won the Onitsha edition of the Gulder Ultimate Chase. The Micro Biology graduate edged out close to 1,200 contestants who turned up at the Achebe Stadium, to compete for the brand new Hyundai Elantra car.