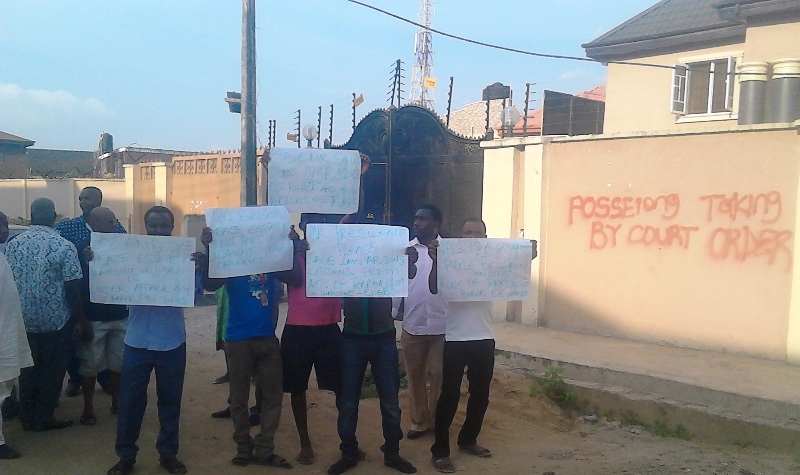 The residents of Peace Estate, Ilamoshe, Oke-Afa, Ejigbo area of Lagos State, has called on the State Governor, Mr. Akinwumi Ambode, to come to their rescue following what they described as illegal invasion of the estate by ‘terrorists’, otherwise known as ‘Ajagungbale’.

Residents of Peace Estate, Ilamoshe, Oke-Afa, Ejigbo area of Lagos State protesting against the continuous harassment in the area by a group of land speculator

The residents, speaking through their Community Development Association (CDA) on Sunday, during a peaceful protest, said recently, a nearby community was invaded an armed touts led by one Mr. Abiodun O. Ojo (Alias Ojo Barber) to vandalise property, threatening to pull down the houses if the residents refused to vacate the property following a court judgment that declared him the ‘true’ owner of the land.

According to a court notice pasted on the houses in the estate obtained by NEWSVERGE, a Lagos High Court on Tuesday, 6 of June, 2006 in suit No: ID/1752/89 between (i) Mr Abiodun O. Ojo and (ii) Mrs. Jokotade Bakare V. Alhaji Imam Ayinde Akinyemi, (ii) Alhaji Bello (Baale) and (iii) Alhaji Raheem Adejumo had delivered judgment in favour of the claimants id est Abiodun O. Ojo and Mrs. Jokotade Bakare.

Spokesman of the Estate, Evangelist Emmanuel Fakas, told NEWSVERGE that the land issue started in 2011 when Mr. Ojo Barber brought a court ruling, claiming that he was the rightful owner of the property.

Fakas stated further that according to the survey plan No: CD/778/77 in the said judgment, Peace Estate was not part of the affected area before Mr. Ojo Barber brought touts called ‘Ajagungbale’ to invade the Estate.

“We want the Lagos State Government to come to our rescue; the situation we are currently facing in this Estate is something that needs urgent government intervention.

“A nearby community was recently invaded by armed thugs but we call them terrorists because no country will allow such illegality. These people came, claiming that they had a court judgment to take possession of properties in a neighbouring Ilamoshe Estate, based on the original survey plan upon which the judgment was delivered.

Some of the property destroyed by the Mr. Abiodun O. Ojo (Alias Ojo Barber)-led armed touts to the Ilamoshe community, Oke-Afa, Ejigbo area of Lagos State

“The first time they came in 2011 to paste notice of possession order, they didn’t enter our estate. But recently when they came to Ilamoshe Estate, they looted all the shops and on 22nd of November, 2015, they came into our Estate fully armed, , in obscured uniforms, toured the entire Estate and from that day till now, they have been harassing the residents of our estate.

“We are asking the Lagos state government to come to our aid. We went to the police at the Ejigbo Division to report the incidence but we were told that nothing could be done until the Surveyor General’s office sent someone here to mark the streets and the houses that were affected in that very judgment. Based on that, they have authorized the so called Ojo Barber and his thugs to stop destroying people’s things but as I speak to you now, the people still visit our community every day; we don’t know the essence of their visits.

“We went back to report to the Police DPO in Ejigbo again but he said as long as they are not destroying anything we should not disturb them, but we told them that they are creating psychological fear and that we don’t want them at all in the Estate.

“Though, the state government had said we should wait for the surveyor general’s men, then, they should wait until when the affected area is earmarked because they are waging a psychological warfare, even though they are not waging a physical warfare against us. Majority of the residents of this estate are people who served the country meritoriously without any stain in their names, they are people who used there last savings to put a roof over their heads in the estate and now they are of age, they are elderly.

“Since this people started harassing our community, most of these elderly people had fallen sick, as we speak to you now, the Chairman of this estate, Alhaji Wasiu Solola, is currently indisposed, as he is currently on admission in the hospital as a result of the trauma and shock attack the hoodlums have created.”

Fakas, however said that though the DPO of Ejigbo police station, has assured that even though the thugs come around, they would not engage in any act of vandalism like they did at the Ilamoshe community.

“We don’t want them to visit our estate again. When they come on daily basis, they come in convoy of cars, drive round the estate with weapons. We cannot condone it anymore”, the people unanimously said.

When asked who exactly the armed uniform thugs are working for, Reverend Felix Adeduro, the Chief Security officer of the Estate said according to materials the thugs pasted around, they were working for the said Mr. Abiodun O. Ojo (Alias Ojo Barber).

But Adeduro, maintained that the said court judgment does not have anything to do with Peace estate, “as a matter of fact we are seeing an expansionist agenda, if they have done it to the other community and they got away with it, they want to extend it to us here”, he added.

The Chief Security officer of the Estate also said that the thugs and their leader claimed that they have sold people’s property.

He stressed that the act of coming into a peaceful estate with arms is nothing but act of terrorism.

The residents in the Estate however threatened that if the government failed to look into the matter, there would be a breakdown of law and order in the area.

Meanwhile, when NEWSVERGE contacted the Lagos state Commissioner of Police, Fatai Owoseni, he said he could not speak on phone but would rather our correspondent come in person to his office for clarification.

Residents of Peace Estate, Ilamoshe, Oke-Afa, Ejigbo area of Lagos State protesting against the continuous harassment in the area by a group of land speculator

Related Topics:residents cry for help‘Terrorists’ invade Lagos estate
Up Next