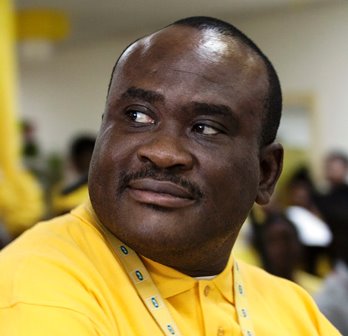 The N1.4 trillion fine imposed on MTN Nigeria by the Nigerian Communications Communication (NCC) has claimed the biggest victims in the Nigerian company with the immediate resignation of the CEO, Mr. Michael Ikpoki, along with Mr. Akinwale Goodluck, who has been the Corporate Services Executive overseeing many departments.

Ikpoki was the first Nigerian CEO of the MTN Nigeria and was appointed in July 2013 having been CEO at MTN Ghana.

Along with their resignation is reduction by NCC in the N1.4 trillion fine to N674 billion ($3.4 billion).

In two separate statements issued in Johannesburg, South Africa, December 3, 2015, the MTN Group in announcing the resignation of both Ikpoki and Goodluck, said it has appointed Ferdi Moolman as new CEO of MTN Nigeria and Amina Oyagbola as head of regulatory and corporate affairs.

The other statement, titled ‘The Nigerian Communications Commission (NCC) reduces imposed fine to US$3.4 billion equivalent and further cautionary announcement,’ read in part:

“The fine relates to the late disconnecting of 5.1 million MTN Nigerian subscribers in August and September 2015.”

But the MTN Group, in the statement, said it was carefully considering the NCC letter and would make a response appropriately:

The Company is carefully considering the NCC’s reply, however the Executive Chairman Phuthuma Nhleko will immediately and urgently re-engage with the Nigerian Authorities before responding formally, as it is essential for the Company to follow due process to ensure the best outcome for the Company, its stakeholders and the Nigerian Authorities and accordingly all factors having a bearing on the situation will be thoroughly and carefully considered before the Company arrives at a final decision.

Trouble over the NCC fine already led to the resignation of the MTN Group CEO, Sifiso Dabengwa.

In the latest developments, the MTN Group announced other appointments and structural changes as follows:

“Effective 1 December 2015 Jyoti Desai assumed the new position of Group Chief Operating Officer (COO). Based in Johannesburg, she reports to the Executive Chairman, Phuthuma Nhleko. Ms Desai has 14 years’ experience at MTN. She has previously held the positions of Chief Information Officer at MTN Nigeria, was COO of MTN Irancell and was recently seconded to support the Nigerian country operations. Her replacement as Group Chief Technology and Information Officer will be announced soon.

“Two regional Vice Presidents (“VP”) have been appointed, also reporting to the Executive Chairman. The VP for WECA is Karl Toriola, with Ismail Jaroudi the VP for MENA. The VP for SEA will be announced soon.

“Based in Nigeria, Mr Toriola has been at MTN for 10 years, having held senior operational roles at MTN Group and MTN Iran. He was formerly also the Chief Technology Officer at MTN Nigeria and CEO at MTN Cameroon.

“Mr Jaroudi has been CEO of MTN Syria since 2006. Prior to this he held senior operational roles for Investcom’s subsidiaries across the Middle East and North Africa.

“Also reporting to the Executive Chairman is the new Group Executive for M&A, Matthew Odgers. The former head of TMT for Africa & the Middle East and head of investment banking for MENA at UBS, Mr Odgers led UBS’s overall relationship with MTN.”

The company says the search for the MTN Group CEO “is underway and remains a priority.”

“This revised structure and strengthened leadership will improve operational oversight and increase management capacity. This will enable MTN to continue to realise its strategy and vision, while also ensuring we achieve high governance standards and robust risk mitigation.” (IT Telecomdigest)