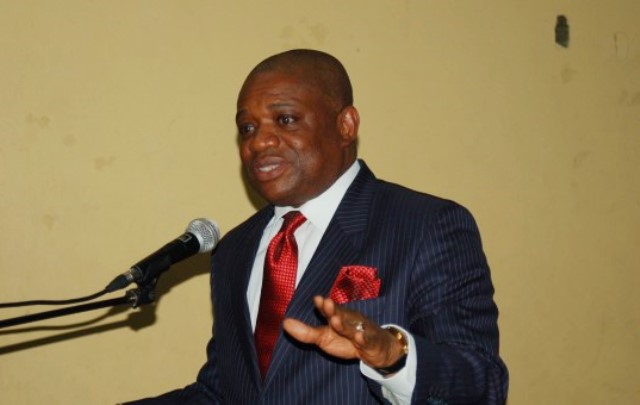 Dr Orji Uzor Kalu, former Abia State Governor, has called on President Muhammadu Buhari to engage traditional leaders and other leaders of thought from South-East to mediate in discussions with those seeking self-determination for the Republic of Biafra.

Kalu said such discussions have become imperative because negotiation is an essential ingredient of democracy.

Speaking to journalists at the weekend on arrival from the United Kingdom at the Murtala Muhammed International Airport, Lagos, Kalu said engagement would be the best way of resolving the lingering agitation for self-determination by members of the Movement for the Sovereign State of Biafra (MASSOB).

He said though , the agitators have a right in line with the United Nations Charter for Human Rights, but it must be pursued within the boundaries of the law rather than embarking on violent, killing of soldiers, policemen and others.

Kalu said any agitation for self-determination that promotes violence and destruction of public property is at variance with the conditions laid out by the United Nations, which prescribes the conduct of a plebiscite by people of the areas to decide where they want to belong to.

He said Buhari must work at all times to pursue the continued unity of all parts of the country , by putting measures in place to address issues raised by those calling for self-determination .

Kalu said: “President Buhari as a matter of fact should set out to engage traditional rulers and leaders of thoughts with security and intelligence agencies on how to resolve this potential trouble.

“Resolving the agitation for self-determination needs an all-inclusive strategy, not use of force, or carrying guns.

“Government needs to engage the agitators and make them realize that it is ready to resolve whatever issues they have raised .I must advise security agencies that using force to quell the agitation for self-determination at this time is not the best strategy .

“It is a wrong strategy hearing people saying that we will quench it by force, we cannot quench anything by force because it is their right to ask for self-determination.”

Kalu further said: “First, I think the signals we are getting from the agitation are quite intriguing in many respects.

“But, as much as government should not disregard the agitation .The strategy of going violent by the agitators is not to be supported because violence in any form, has never been known as the way to resolve issues of agitation for self determination

As a patriotic Nigerian, I believe in the unity and indivisibility of this country. “As an Igbere man from Abia State, I love this country and will continue to push for its togetherness.

“To be honest with you, those boys are right in their quest to agitate for self-determination.

“They have a right to demonstrate, for what they consider may be their right as recognized by the United Nations Charter for Human Rights.

“But, what I do not agree with is the violence associated with the demonstrations, and the alleged killing of soldiers by the agitators.

“No commander in chief of any country should tolerate such act by any group no matter the issue involved.

“It is an affront on the state. If I were the commander in chief I will never tolerate such brazen act of lawlessness and violence.

“Any group that kills one of my soldiers I will invoke the law to handle such people.

“Nobody no matter how disenchanted over their agitation should think of killing any soldier or police in the name of agitating for their own republic.

“You cannot kill any soldier or police and get away with it. This is wrong, not because you are calling for your own republic.

The quest for self-determination should not be used as an avenue to commit serious criminality.

“Agreed it is a right, but how do you go about it. From the point of view of an international business man, the agitators could express how they feel about self-determination. But, the question is: are those rights really worth it?

“If I were the president of Nigeria, I will like to annex Benin Republic and other countries to become what I will call   the United States of Nigeria including some West Africa countries.

“So, why should any government allow any part of the country at this material time to clamour for being allowed to separate itself. So, why do you want to remove some parts now, those boys also have a right to opt for what they want.”

He further said: “This remains largely conditional, if only the people in the affected areas are left to conduct a plebiscite, to say whether or not it is something United Nations has properly defined as a precondition for such agitation .

“This is what you should do the people should do if they are no longer comfortable with their inclusion in the current political arrangement that constitute the Federal Republic of Nigeria.

“President Buhari should be very familiar with this development, because the agitation by MASSOB people has been there from time immemorial, it is not something new.

“If we take our minds back, that was how the insurgency of Boko Haram started.

“When the insurgents first started the killings, it occurred in a Catholic Church. And as an adherent of that denomination I vehemently condemned it. I told you airport correspondents, I said that when Boko Haram finish killing the catholic, they will go and kill everybody.

“This was how kidnapping started when I was governor, they were kidnapping white people and I spoke out, people in Federal Government abused me

“So, I will advise the Federal Government that as a federation, it must by properly managed to resolve agitations by some people, who are seeking to opt out as a republic.

“Government cannot stop people from such agitation, what is critical is how the issue concerning such agitation is handled. It is the management of the people that matters.

“Recall what happened in Eastern Europe, they used engagement strategy not force. My advice is that it is only a president that does not know what he wants that will want a section of his country to go. I think negotiation is part of democracy.”

He said addressing infrastructural deficit in the South East would douse clamour for self-determination.

He went on: “Reasonably, this is a serious matter.

“Honestly, the state of the roads in this region is not good at all. Consider for instance, the Enugu-Port Harcourt, Aba- Umuahia Express Road that has not been constructed .

“If I were the president I will fix this road in the next two years to quell this recurring agitation.

What about the Oka – Onitsha Expressway , it is not yet constructed , what about the Umuahia – Ohafia – Arochukwu Road leading to Cross River , government should fix these roads within a short time as part of measures to resolve the agitations .

“What about Arondizuogu – Okigwe Expressway, the road has not been fixed.

The government should also consider fixing Enugu – Makurdi Road, it is not good that people are dying on these roads every day.

It is for these roads that I quarrelled with the Obasanjo administration since 2001.

“I consistently drew attention to the fact that roads in the South East, in particular federal roads were very bad and government has taken this for granted.

Look back at what I said over ten years ago about the state of our roads, they are still recurring today and government is still playing politics with it.

To sustain the unity of this country, which is foremost, government should look at these issues and resolve them. That is the truth and it must be said.”

Related Topics:bemoans destruction of property by MASSOBKalu advices Buhari on pro-Biafra agitators
Up Next

OPINION: A reading list for Ministers By Reuben Abati