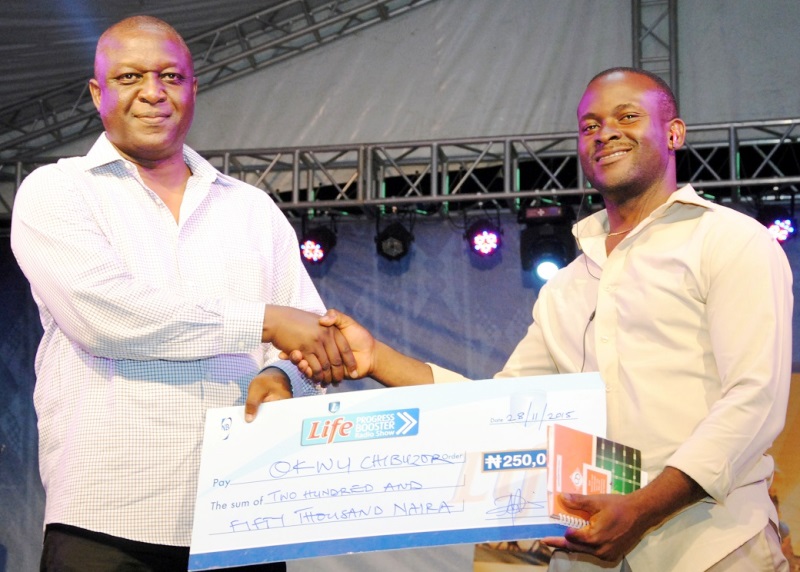 Under the scheme, Life Continental Lager Beer has so far given out a grant of N250, 000 each to 50 young entrepreneurs operating in the Eastern part of the country. The non-refundable grant would help alleviate the financial challenges operators of the affected Small and Medium Scale Enterprises might be facing in their respective operations.

Participants at the maiden edition of Umu Oganiru Carnival, were given the opportunity to summit their proposals to participate in the scheme. Okwu’s proposal on Shovel Production was adjudged the best by the judges ahead of proposals submitted by Ukechukwu Mathew, Precious Osuji, and Chinedu Ogus. While Okwu was announced the star winner in that group; Osuji and Ogus were named runners up.

Speaking about the grant, Ojukwu said he never believed in the scheme until he got the opportunity to participate in it. He said the grant will surely elevate his business of film production to the next level and gave kudos to the Life Continental Lager Beer Team for being proactive to come up with the initiative of Life Progress Booster which he said has started impacting positively on the fortunes of the lucky SMEs in the East.

He therefore promised that the grant will spur him to take the scheme to the nooks and crannies of Onitsha and especially to those young entrepreneurs who still do not believe in the scheme.

Similarly, Okwu attributed his success in the contest to the power of prayer and determination. According to him, he was inspired by the testimonies given by past winners who shared their experiences with the audience at the Umu Oganiru Carnival. Okwu said their motivation that anybody could win in the scheme encouraged him to submit his proposal during the Carnival.

He was however grateful to Life Continental Beer for the initiative which he said would assist many promoters of SMEs to expand their operations and boost the aggregate economy.

The Carnival, which was the first of its kind, drew participants from Onitsha and other cities in the East. The event commenced with the breaking of kola nut at the Godwin Achebe Mini Stadium, Fegge, Onitsha in Onitsha South Local Government Area. The breaking of the kola nut was handled by the Secretary General of the Anambra State Association of Town Unions, Peter Nwagu; and the body’s First Assistant Secretary, Christian Okafor who led representatives of the 177 communities in Anambra state to the Carnival.

Following the short opening ceremony at the Stadium, the Carnival procession, started in front of the Palace of the Obi of Onitsha, Igwe Nnayelugo Alfred Achebe. The Carnival procession was declared open by the 21-canon shot salutation from the Palace signalling the royal backing for the celebration of the people’s culture and tradition. The procession then headed to the main market in the city with mastery display of the cultural heritage of Ndigbo in that part of the country. Other parts of the city covered by the Carnival procession included Onosi Onira Retreat Garden, Awka Road, Zik Roundabout, Oguta Road, and Beer Market.

The Ogenne Dance Group, masquerades, Young Stars Life Band from Awka, and Sunny Bobo were not left out of the fun as they entertained the audience during the procession and at the Stadium where the people later converged to relax and savour the brand.

The King of Igbo highlife, Onyinye Osita Osadebe; who incidentally is the son of the late Chief Osita Osadebe also entertained the teeming guests at the Stadium. Among the guests at the peaceful event were members of Exclusive Club of Onitsha led by their leader, Chinenye Emenyonu. Emenyonu commended NB for the strong backing given to Life Continental Beer. According to her, since Nigerian Breweries took over production of the product, Life Beer has not remained same. “The brand sells fast and is enjoyed by many people who want to quench their thirst for premium beer”. She said.