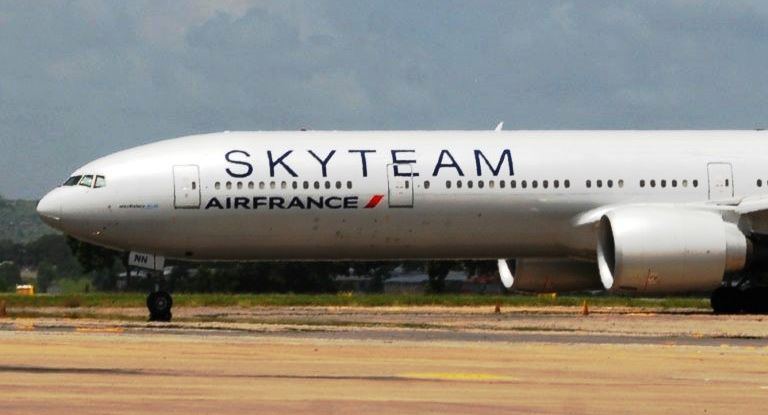 An Air France passenger jet was forced to make an emergency landing in Kenya after a fake bomb was found in a toilet, the airline says.

The Boeing 777, on its way from Mauritius to Paris, was evacuated at Mombasa airport and the suspicious device taken away for examination.

Air France chief Frederic Gagey later said it was made of a cardboard box, paper and a timer.

He described it as an “extremely aggressive act”.

The plane, carrying 459 passengers and 14 crew, had left Mauritius at 01:00 GMT and had been due to fly directly to Charles de Gaulle airport in Paris.

Several passengers from the flight have been questioned by Kenyan police.

Mr Gagey told a news conference that the airline would press charges against those responsible and an inquiry would be held.

But he denied there had been any problem with security checks in Mauritius, saying the device contained no explosives, so would not have been detected.

He said the device appeared to be made of a cardboard, sheets of paper and some kind of kitchen timer, and had been placed in a cupboard behind a mirror in the toilet.

Mr Gagey said he did not know exactly when it had been placed there, but that the cupboard had been checked before the flight so it was assumed that it was put there during the flight.

He said the object was made of material not usually found on the plane.

Mr Gagey thanked the crew and the Kenyan authorities for the way they had handled the incident.

Earlier, a police official quoted by AP news agency said a passenger had noticed an object in the toilet that looked like “a stopwatch mounted on a box”.

Mr Gagey said the crew was alerted, and the pilots decided to land at the nearest airport. Both the aircraft and Moi International Airport in Mombasa were evacuated while the device was removed.

Joseph Nkaissery, cabinet secretary at Kenya’s ministry of interior, said authorities from France and Mauritius had been helping with the investigation.

One of those on board the aircraft, Benoit Lucchini, said passengers were calm and were told by the crew that the plane was being diverted because of a technical problem.

“But the personnel of Air France were just great, just wonderful. So they keep everybody calm and really quiet.”

France is still on high alert following bomb attacks and shootings in Paris.

So-called Islamic State (IS) said it carried out the attacks in response to France’s military action in Syria. (AP)