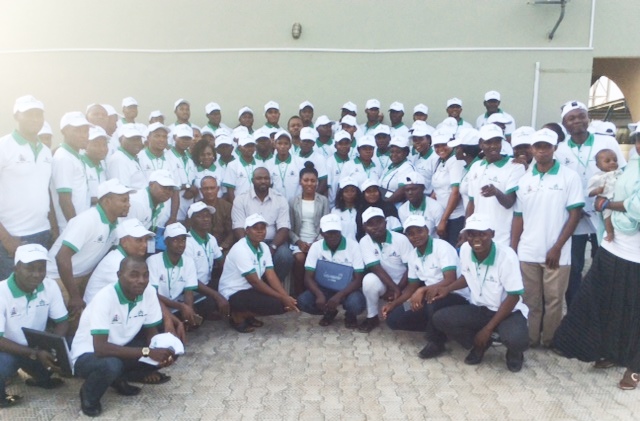 The Graduate Internship Scheme of the Federal government has in the past one year impacted positively on the lives of unemployed graduates in Taraba writes JUSTIN TYOPUUSU from Jalingo.

The Graduate Internship Scheme, GIS, a programme initiated by the past administration of President Goodluck Jonathan through the federal ministry of finance to check rising unemployment in the country has recorded a huge success in Taraba.

Today, out of the 200 graduates that benefited from the programme in the state, more than half have indicated interest to start their own businesses, using the skills they acquired during the one year internship programme.

The Scheme, GIS, was initiated by the Federal Ministry of Finance to provide career development and entrepreneurship skills training for unemployed graduates across the country and prepare them to establish their own businesses.

Following the partial removal of fuel subsidy in 2014, the Federal Government initiated the programme to enabled beneficiaries acquire skills and trainings that would make them sought after by employers of labour thereby increasing their chances of securing jobs.

Aside enhancing the marketability skills of participants to get jobs, the beneficiaries, by the design of the programme was aimed at ensuring that participants acquired entrepreneurial skills that would make them self-sustainable and employers of labour rather than unnecessarily looking for government jobs.

During the week long exit training of interns from Taraba state which was conducted in two batches of 100 interns each, graduate interns were exposed to skills required from for seeking employment and pursuing self-employment, how to invest in self and improve skills and productivity.

They were also exposed to the understanding of the labour market and how to fit into market within their immediate environment and elsewhere as well as an understanding of entrepreneurship business opportunities and funding sources.

At commencement of the training in Jalingo, Lead Consultant, ‘Micheal Jacobs Consulting’, Mr. Abubakar Ahmad said the week-long exit training workshop was to prepare the interns to take to self-businesses and stop over dependence on white collar jobs which are not readily available.

“Given the feedback we have so far received here in Taraba, I want to advice the Federal Government to sustain the programme considering the successes recorded,” he said.

In his closing remarks at the end of the second batch, Mr. Vincent Adejoh of Pactworld limited consulting for Fortis Nigeria who facilitated the training urged the interns to use the knowledge gained during the training to become good entrepreneurs.

“You have been given the key to unlock the potential of the state. Taraba is still is virgin in terms of business opportunities and market, I urged you therefore to use the basic business planning and financial management tools gained to establish and run small and medium scale businesses, to boost your income,” he said.

Interns such as Mercy, Bajo, Esthon Charles, Rita Sanda amongst others all hailed the programme, saying Good luck had a good vision for the youths and urged President Buhari to sustained it, so that other graduates can benefit on the programme.

According to Rita Sanda, one of the interns said the experience they garnered through the programme have added value to their lives and would go and a long way to assist them in contributing their quota to national development.

“I have been offered job by the firm where I did my internship and many other interns too were returned. I am convinced that with the training we have received it would be easier for the interns to secure jobs based on the training and skills we have acquired through the scheme,” she said.

To Mercy Bajo, she is into honey business courtesy of GIS and said the federal government should sustain the programme so as to help create more jobs for the youths.

“Through the programme interns are exposed to the various sources of funding for small and medium scale businesses and access to funding to start such businesses are made easy, but not all were privilege to benefit in the first phase and sit should be sustained.”

In the days ahead, beneficiaries of the programme said, they would establish businesses and take other youths out of the street as their contribution to reduce youth unemployment in the state.

Related Topics:GIS and the making of entrepreneurs in Taraba
Up Next

OPINION: El-Zakzaky, religion and the Nigerian state By Reuben Abati