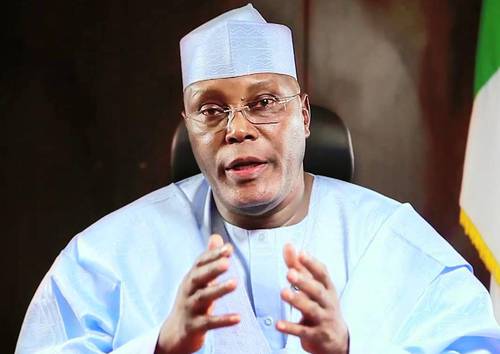 Former Vice President Atiku Abubakar says restructuring the country is in the interest of the North in particular and the country in general.

Atiku said this at the launch of a book titled: “The Nigerian Federalism; Continuing the Quest for Stability and Nation Building’’ in Abuja on Monday.

The book, which was written by some federalism scholars in the African Policy Research Institute was edited by Mr Okechukwu Ibeanu and Alhaji Mohammad Kuna.

The former Vice President described the book as an important intervention, adding that it would contribute to the ongoing debate on the country`s federalism and possibly settle the issues.

He noted that the structure and practice of Nigerian federalism had been a key topic of discussion and debates since the amalgamation of the North and South Protectorates in 1914.

He said that this was with varying levels of intensity, adding that opinions of different section of the country on the topic were all legitimate.

Atiku, however, said that what he found odd and somewhat unhelpful was the argument of those who said that the country`s unity could not be renegotiated.

He said that those with such arguments usually proceeded to equate every demand for restructuring the country as an attempt to break the country.

He stressed that every form of human relationships was negotiable while every political relationship was open for negotiations without pre-set outcomes.

“As a democrat and businessman I do not fear negotiations. That is what reasonable human beings do. This is even more important if a stubborn resistance against negotiations can lead to unsavoury outcomes.

“I have spoken a number of times on the need to restructure our federation in order to devolve more power and resources to the federating units.

“Recently in Kaduna, I told an audience of mostly my compatriots from the North, where most of the resistance against restructuring seems to come from that restructuring is in the interest of the North and Nigeria,’’ he said.

Ayiku maintained that federalisms across the world were works in progress, adding that there was no ideal federal system or true federalism as claimed.

He added that each nation had to work out the best federal system that suited it.

He said that Nigerians must acknowledge that it was disingenuous if not outright dishonest to say that the system was not the problem.

“If the problem is just the operators; how come we have failed for 50 years to produce the right people?,’’ the former Vice President queried.

Atiku said that national unity did not mean the absence of disagreement or agitations.

According to him, disagreements and peaceful agitations indicate vibrant and living relationships, while the key to making national progress is to manage those disagreements in peaceful and mature ways.

He said that political and civic leaders from across the country must come together, discuss, negotiate and make the necessary compromises and sacrifices needed to restructure the federation.

He said that this would make the people stronger, more united, and productive and make the country more competitive.

The former Vice President later lunched the book with the sum of N5 million.

Mr Chris Uche, the Chairman of the occasion, described the book as the most comprehensive and authoritative on Nigerian federalism, adding that it was a critical assessment and real definition of the subject matter.

Amb. Sunday Dogonyaro, the Executive Director of African Policy Research Institute, said that the institute took the initiative to write the book three years ago.

He said that the book was not a personal view neither was it a political book but one that would help to explain the Nigerian federalism and why certain policies were taken.

The occasion was attended by former ambassadors and representatives of some government agencies.