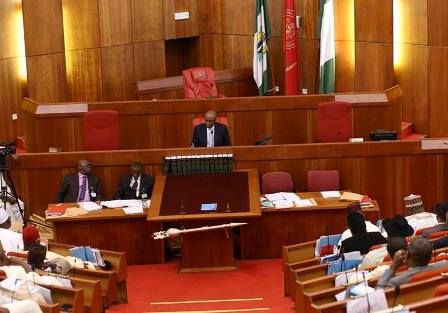 The Senate has set aside two legislative days to amend and pass the Nigerian Customs Service Management Act 2017.

In the new amendment, the Upper Chamber scrapped the governing board of the Nigeria Customs Service and replaced it with the Nigerian Customs Commission.

The Senate President, Dr. Bukola Saraki, noted during Wednesday’s plenary that the amendment of the bill would bring the much-needed reforms to the Service.

The governing board is headed by the Minister of Finance who oversees the activities of the service.

The new commission would be headed by a chairman who would be appointed by the President, but subject to the confirmation of the Nigerian Senate.

When the law becomes operational, the governing board would give way for the new commission to be established.

The new regime prescribes the use of pre-shipment and post-shipment inspection, which means that all ships and vessels coming into Nigeria must be thoroughly inspected from country of origin to the port of destination.

The bill contains 16 penal clauses, one of which recommends varied punishments from dismissal to imprisonment for Customs officers who violate the provisions.

Also at plenary, the Senate condemned the alleged rape and killing of two women in Edo State by suspected herdsmen.

The lawmaker representing Edo Central, Senator Ordia Clifford, informed the Senate of the killings and asked the Upper House to intervene in the matter.

The Senate has directed security agencies to apprehend the perpetrators of the attack and also arrest those who disguise as herdsmen to unleash violence.