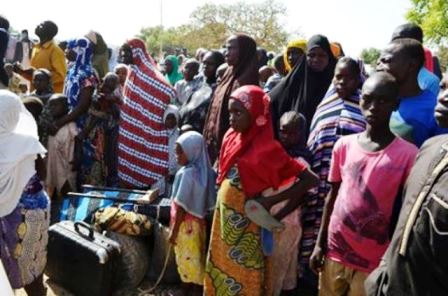 Yarakawa told our reporter in Abuja on Thursday that saying all those affected by the attacks resided in the villages.

He fielded questions during the farewell dinner organised by the Federal Ministry of Women Affairs and Social Development in honour of the 106 released abducted school girls.

He condemned stories making rounds that the abduction of the school girls from the Chibok community is a political tale, emphasising that no sane person will joke with the lives of others.

He also noted that there was no IDPs in Chibok, assuring that every indigene of the community resided in Chibok.

“It is crazy to say that the Chibok girl’s story is a political play because human lives are involved. This is beyond politics and it is unfortunate that some people think in that way.

“There are no IDP camps in Chibok.

“The community is mixed with Christian and Muslim and the issue of it being religious crises should also not come up because the issue of religion is not serious in Chibok as we are mixed up and relating well”.

Also among the delegation was the former CAN chairman in Borno state Rev. Titus Kona, who prayed that the Federal Government would fulfill all its promises on the released girls by paying for their educational.

He also appealed for the release of the remaining girls, just as he appealed to the Boko Haram terrorists for their release.

“Boko Haram members are parents, I am sure Shekau has a wife and children, he should have pity on the girls and release them,” he said.