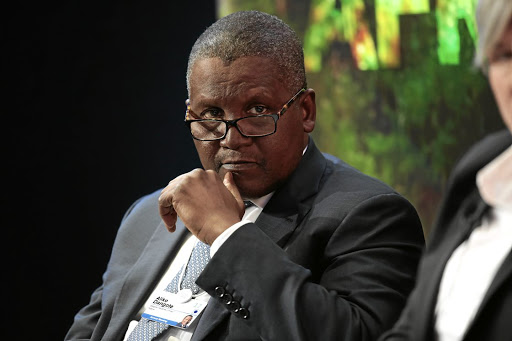 Africa’s richest man, Aliko Dangote maintained his position on the newly released Forbes’ list of African billionaires, even as he lost almost $2bn compared to his worth last year. The Forbes list, which was released on Wednesday revealed that there were fewer and poorer billionaires on the African continent in 2019.

Dangote’s estimated $10.3 billion net worth is nearly $2 billion less than a year ago, primarily due to a roughly 20 per cent drop in the stock price of Dangote Cement, his most valuable asset. Folorunsho Alakija was one of the billionaires, who suffered a drop in their net worth between last year and this year.

She is currently number 19 on the 20-man list. Forbes report that, Alakija’s net worth dropped due to a decline in the value of one of Nigeria’s most productive oil fields. It is claimed that the decline can be partly blamed on the fact that the oil field’s production had levelled off.

His net worth has climbed dramatically from $5.3 billion in January 2018 as a result of more detailed information provided by him about his assets. Nigeria’s cement mogul Abdulsamad Rabiu, who runs and owns the BUA Group, returns to the list at number 16, for the first time since 2015. He merged his Kalambaina Cement firm into publicly traded Cement Company of Northern Nigeria, which he controlled, in late 2018.

I will defeat APC, PDP – Moghalu