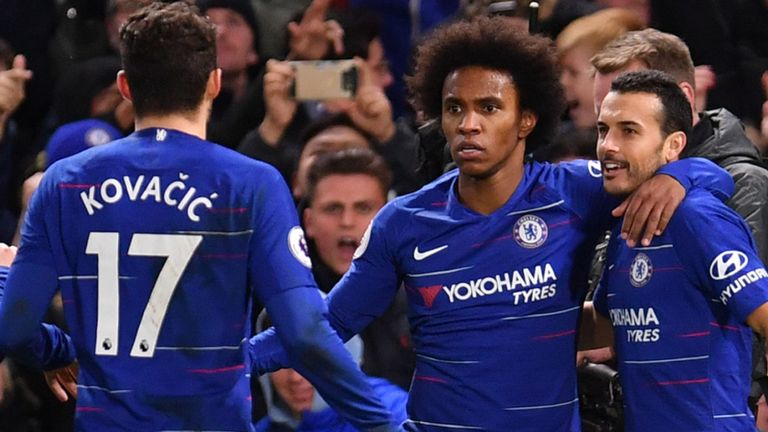 Chelsea cemented their grip on fourth place in the Premier League as Willian’s sublime strike sealed a 2-1 win over struggling Newcastle on Saturday.

Maurizio Sarri’s side took the lead through Pedro’s early goal, but Ciaran Clark snatched a shock equaliser before halftime.

With Chelsea fans beginning to lose patience at their team’s latest spluttering home display, Willian lifted the mood in the nick of time with his superb second-half curler.

Chelsea have won five of their last seven league matches and sit six points clear of fifth-placed Arsenal, who lost at West Ham earlier on Saturday.

But, while Sarri will be relieved to see Chelsea remain in control of the race to qualify for the Champions League, this far from convincing performance raised fresh questions about the former Napoli manager’s tactics.

Labouring to beat third-bottom Newcastle showed how far Chelsea have to go to bridge the gap in class to leaders Liverpool and champions Manchester City.

Newcastle find themselves in the relegation zone as a result of wins for Southampton and Burnley and another winter of discontent is brewing for the Magpies.

They have won only once in their last nine league games and fans again called for controversial owner Mike Ashley to sell up.

Tuesday’s 1-0 defeat against Tottenham in the League Cup semifinal first leg was the latest display of attacking impotence from misfiring Chelsea, who had failed to score in their last two home league games.

All eyes on Murray as Australian Open gets underway