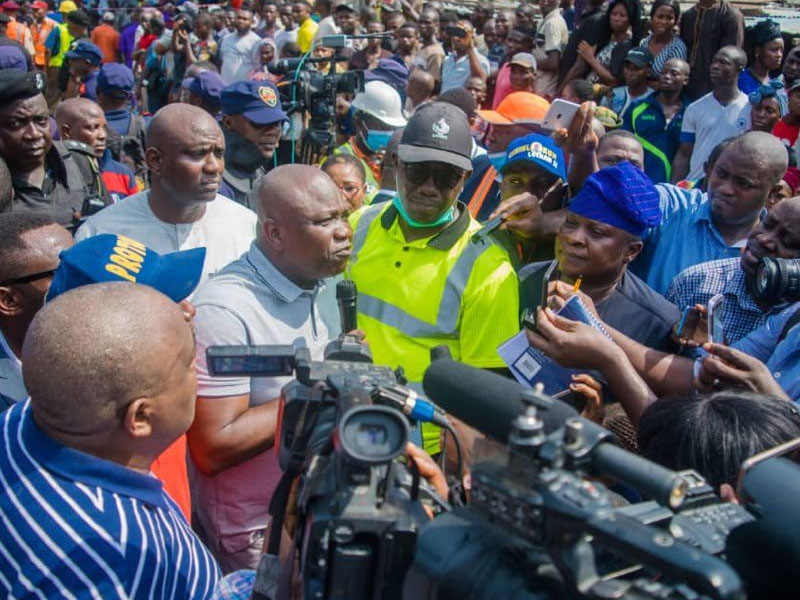 Gov. Akinwunmi Ambode of Lagos State on Wednesday blamed the landlord of the collapsed building on Lagos Island which claimed lives for resisting government demolition plan.

Ambode, who visited the scene of the collapsed three-storeyed building on Mercy Street, Ita-Faji , Lagos, said that many buildings were marked for demolition but the landlords resisted the plan.

He expressed sadness over the incident, stressing that the marked building for demolition would be pulled down.

He said the collapsed building was a residential house with the school operating illegally.

The governor said that the state government would take care of the hospital bills of those injured in the incident.

The governor said the state would investigate the building collapse, while ensuring that those marked were pulled down so as to save lives.

He said integrity test would also be carried out on other buildings in the area.

“As I speak, the deputy governor is now at the General Hospital, Marina, to see all the victims. The state government will take care of the hospital bills. I commiserate with families that lost their dear ones in the building.

“I learnt about 25 persons had been rescued. I appeal to the residents to allow the rescue operators to carry out their work so that more lives can be rescued,” he said.

The General Manager of LASEMA, Mr Adesina Tiamiyu, told our correspondent that many had been rescued, while some deaths recorded.

“I can’t say how many persons rescued or dead. We met the local people in operation when we came in. Some had been rescued. The operation is still on,” he said.

It was reported that a teacher, trapped with about 15 pupils under the rubble, called to seek for help, while Julius Berger and other emergency services were on ground to assist inbtye rescue operation as at 2.48 p.m.

Buhari sympathises with families of victims of Lagos building collapse