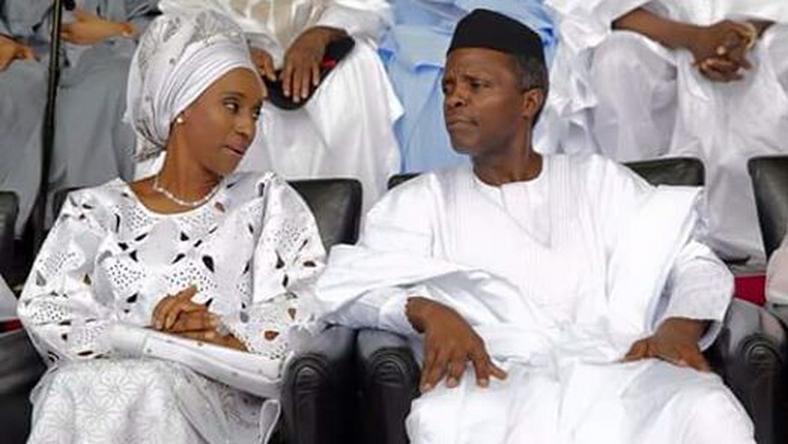 Vice President Yemi Osinbajo and his wife, Mrs Dolapo Osinbajo, on Sunday attended an Interdenominational Service of Praise and Thanksgiving at their hometown, Ikenne in Ogun.

The service, held at Obafemi Awolowo Square, Ikenne, commenced with a praise and worship session with songs rendered by Buki Bekes while Osinbajo and Dolapo swayed harmoniously.

Addressing the congregation, Osinbajo said it was God’s mercy that made him and his crew come out unhurt from the crashed helicopter.

A helicopter carrying Vice-President Yemi and his entourage had crashlanded in Kabba, Kogi, on Feb. 2.

The vice president rendered his favorite Yoruba song ‘Oke Oke la nlo’ and some other songs while the congregation sang along.

Earlier, Dolapo led the congregation to a worship song and afterwards testified God’s goodness and mercies on their lives especially for sparing the life of the vice president and his crew in the helicopter crash.

The first bible reading, taken from Psalm 149, was read by Gov. Akinwunmi Abode of Lagos State.

In a sermon, Most Rev. Michael Fape, Archbishop of the Ecclesiastical Province of Lagos and Bishop of Remo Diocese, thanked God for his mercies and for sparing Osinbajo’s life in the ill-fated helicopter.

He said that it was the mercy of God that brought his electoral victory and prayed that the same God would abide by the vice president.

He described the vice president as a humble and God fearing man.

“As you move on to the next level, mercy will follow you and if mercy follows you, no one can contend with you,” he said.

The bishop later led the congregation to a special prayer for the vice president and his wife.

In a remark, Dapo Abiodun, Governor-elect of Ogun, thanked God for giving the people of the state, a worthy son, in the person of Osinbajo.

He described him as an embodiment of sincerity, diligence and intellect.

Abiodun said he too was a testimony that God answers prayers, saying he would not have won his election if not for God.

He pledged to give the people of Ogun a worthy leadership.