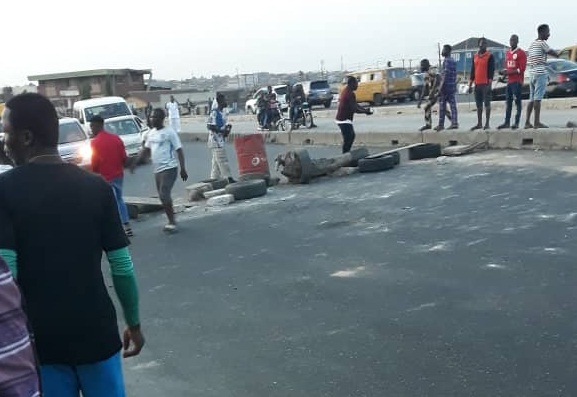 Some residents of Mangoro/Onipetesi community in Lagos on Sunday went on a rampage blocking the Oshodi/Abeokuta expressway in protest against the killing of a youth in the area.

Our correspondent reports that the angry residents blocked the major roads with tyres and woods after a youth was allegedly shot dead by policemen from AntiCultism Unit of Lagos State Command.

Our correspondent learnt that an unmarked commercial bus occupied by the policemen had visited the community on Sunday afternoon in search of youths dressed wildly and wore dreadlocks.

It was gathered that one of the police operatives allegedly shot dead a youth simply identified as Kunle from behind in an attempt to disperse a crowd which had gathered during the raid.

A witness, who gave his name as Ayo, told our correspondent that everything happened in a flash.

“F-SARS had come to arrest one of the boys of a major music producer who was wears dreads; I and some others who were drinking at a bar saw what was happening and quickly explained to the policemen that he was not a Yahoo boy.

“They ignored our talks and kept dragging the boy to their vehicle, we all came out from the bar and kept explaining to the policemen that they were arresting a wrong person.

“In an attempt to disperse the crowd, a first shot was fired to the ground.

“Seeing this, I and the others quickly turned back to avoid trouble, but because Kunle was probably the last person in the crowd, he was shot point blank from behind.

“He didn’t even know he was shot till we had trekked some few metres before we all saw he was bleeding, he died on his way to the hospital at Ikeja,” the witness said.

It was reported that following the incident, angry residents blocked the major road, setting tyres ablaze and obstructing commuters from passing.

Spokesman for Lagos State Police Command, Bala Elkana, told our correspondent he was yet to be briefed of the incident as at 9pm on Sunday.