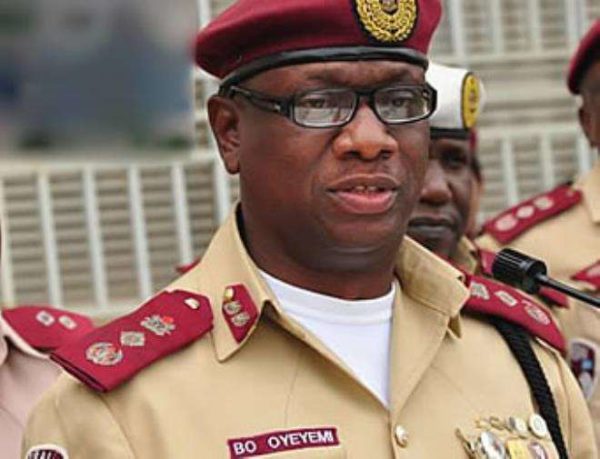 The Corps Marshal of the Federal Road Safety Corps (FRSC), Dr Boboye Oyeyemi, has called for deep reflection by Christian faithful and love for one another, especially, while using the roads during Easter.

Boboye stated this in a press statement through Mr Bisi Kazeem, the FRSC Public Education Officer, issued to newsmen in Lagos on Saturday.

The Corps Marshal congratulated Christians on the celebration, urging them to take advantage of the spiritual benefits of the season which he said was beyond mere meriments.

Oyeyemi said that the traffic chaos normally experienced during the period was uncalled for.

He added that the experience showed lack of consideration and love for one another by motorists, acts that contradicted the spirituality of the period.

“If all motorists show equal love and care for one another as Jesus Christ did when he sacrificed his life for the salvation of humanity, there will have been no need for the mindlessness and gridlocks that usually characterise the annual celebration.

“We call for attitudinal change from people through deliberate commitment to safety of lives and property on the nation’s highways.

“It is only through such self discipline and regulation that the much expected safer road environments can be guaranteed.

“I wish to seize the opportunity of the celebration to call for deep reflection by people on the need for attitudinal change toward road safety,” Oyeyemi said.

According to him, it is a collective campaign against the menace of road traffic crashes in the country.

The FRSC boss said that the corps had put some measures in place to ensuring safer and peaceful celebrations.

Oyeyemi said that adequate numbers of personnel and logistics had been mobilised to cover all roads across the country.

According to him, attentions have been given to some particular and identified corridors where movement of traffic is expected to be higher during the celebration.

He urged motorists to drive with care; obey all traffic rules and regulations; avoid distractions through the use of phone while driving.

Oyeyemi appealed to motorists to ensure that all front and back seat passengers as well as children were properly belted up while in motion.

The Corps Marshal also thanked President Muhammadu Buhari for the immense support being given to the corps, with massive injection of patrol logistics.

The FRSC boss said that the patrol logistics had enhanced the operational capabilities of the corps and created opportunities for the establishment of more unit commands and outposts across the country.

”The development will take effect soon, following the last inauguration of 74 patrol vehicles and three ambulances provided to the Corps by the administration.

“All these will no doubt, go along way in making our efforts at creating safer road environments in the country possible, #” Oyeyemi said.

He, however, solicited the cooperation of members of the public and called on them to promptly report road emergencies to the FRSC toll free line: 122.

Oyeyemi assured the publicpubli the call centre and other facilities of the Corps would be open and remain functional during the celebration and beyond.

He wished everyone a happy celebration, and urged motorists to drive carefully to stay alive, saying that it was only the living that could celebrate.

British killed, 3 others kidnapped in Kaduna