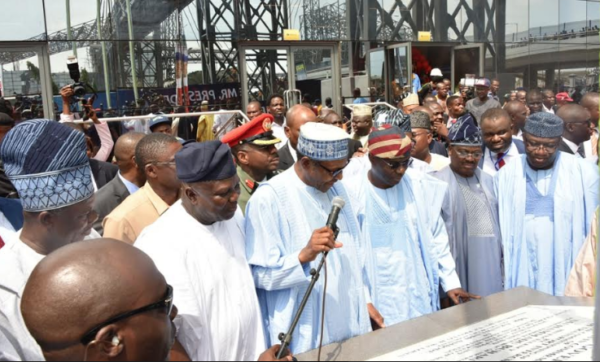 The president, who unveiled the plaque and cut the tape to inaugurate the project, was accompanied by Governor Ibikunle Amosu of Ogun, Gov. Ambode of Lagos State, Governor-Elect, Mr Babajide Sanwo-Olu and his deputy, among other politicians.

Our correspondent reports that the Murtala Mohammed International Airport Road was formerly four lanes before its recent expansion into a 10-lane, redesigned to include two flyover bridges at Mafoluku and the Haji Camp with five pedestrian overhead bridges.

The new road is expected to ease gridlock and enhance easy movement of travelers in and out of the country as well as those traveling between Apapa, Oshodi and Ikeja axis.

Some road users in Lagos expressed joy as the president inaugurated the road which they noted would ease gridlock as well as boost Nigeria’s image and dignity.

The road users in separate interviews after Buhari inaugurated the road told NAN that the old dilapidated road did not portray Nigeria in good light.

They commended the initiative of the new road for both its aesthetics and easy access to the airport.

A freight forwarder, Mr Babatunde Owolabi, told our correspondent that the new road would reduce travel time and enhance business activities in Lagos.

“This is a world class road, it will allow easy access to the airport and back to wherever you are going. Before the construction, this road used to be clumsy because it was not wide like this.

“There used to be a lot of traffic congestion before today, but this construction will ease movement. I am happy, this is a good project to make life easy for motorists and other road users,” he said.

Mr John Goodnews, a tricycle operator, who plies the Airport Road, commended the federal and Lagos state governments for the new lease of life, saying that the road would remove gridlock and improve security on the axis.

“Governor Ambode has done so well, you need to come out and see these street lights at night, you will think you are in London. The lights have boosted security here because everywhere is well lit at night,” he said.

“In the past, this road was not the Airport Road we wanted, but this construction now makes the road to look like a real International Airport Road that Nigeria deserves.

“They have done something nice for Lagosians and other people that will be plying this road,” he said.

A vulcanizer at Seven and Eight bus stop on Airport Road, Mr Nuru Taiye joined Mr Sunday Udoh, a commercial motorcycle operator on the Airport Road axis to commend the additional lanes which they noted would ease usual gridlock often associated with the road.

Commenting on the project, Mr Rotimi Thomas, Project Director, Lagos State Ministry of Works and Infrastructure, said the project was unique because it is the international gateway to the nation.

“The road is starting from the new section of the bridge at Oshodi that is the beginning and it runs from through Apakun, Osolo Way onto the airport. The total length of the road is about 5.7 kilometres.

“The basic features of the road which is in compliance with international standards is that it has three main carriageways, two service lanes on either sides of the road.” he said.

He explained that the road was a two-lane which had been expanded and a U-turn bridge included for ease of access in and out of the airport.

He projected the road to last for 25 years and pledged the state government’s commitment to its routine maintenance.

He added that there was a control access road with service lanes to ensure smooth motoring experience for road users.

Representatives of the Oba of Lagos and several traditional rulers joined other stakeholders to welcome President Buhari to the event.

We are training over 5,000 youths to develop tourism potential – Ooni of Ife