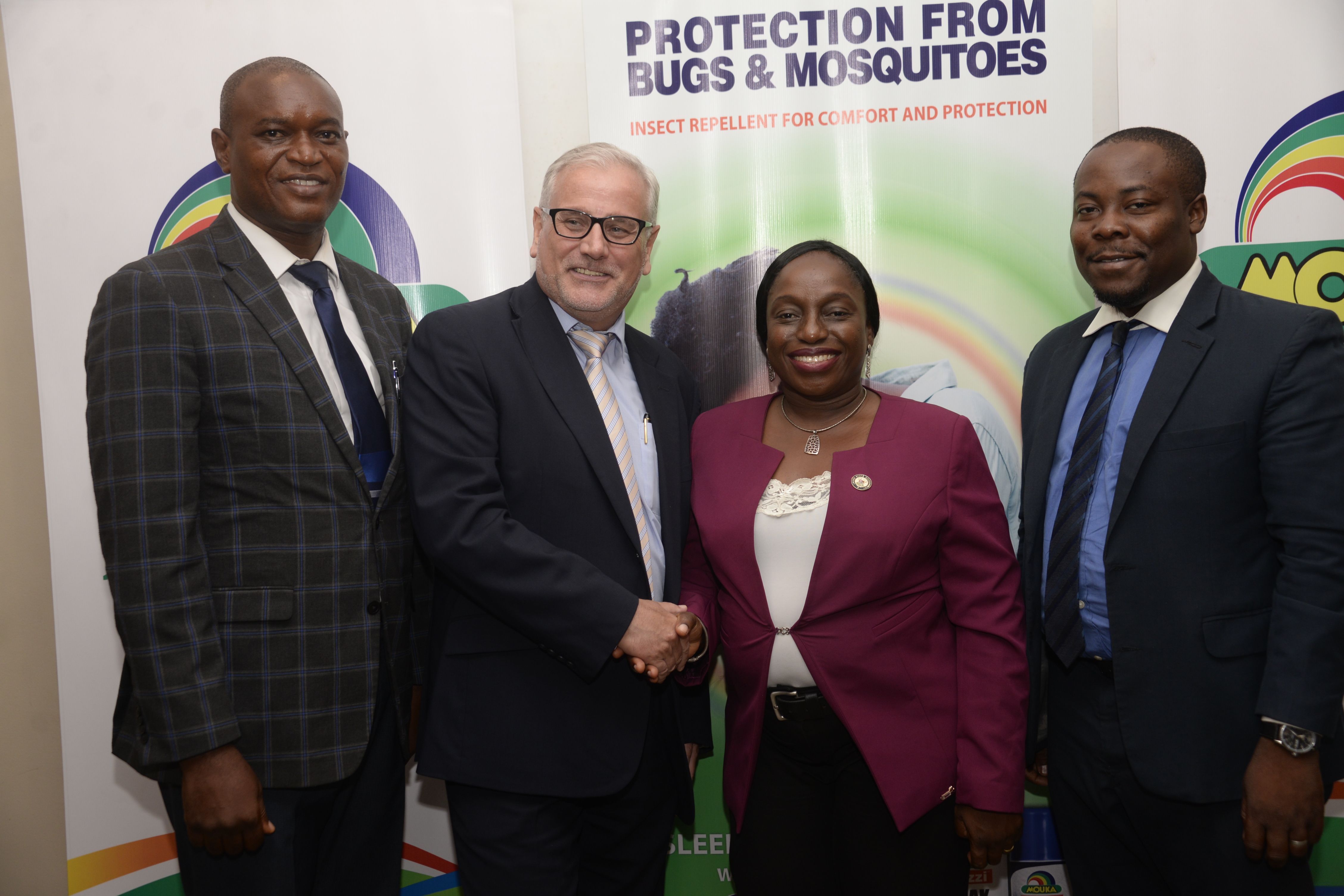 Mouka Limited, Nigeria’s leading manufacturer of mattresses and other bedding products, has launched an innovative range of insect repellents in line with its mission of Adding Comfort to Life. To commemorate the 2019 World Malaria Day, an event was organised by the foam manufacturer in Lagos on Wednesday 24th April.Chief Executive Officer of Mouka, Raymond Murphy said the launch of Mouka Mozzi Insect Repellents which create a protective halo from mosquitoes, is the company’s contribution towards the global campaign against malaria.

According to Murphy, in addition to Mosquitoes, Mouka Mozzialso provides protection from bedbugs, mould, bacteria spores, spiders, cockroaches and dust mites. With each application, a consumer can enjoy 24 hours protection for up to 3 months which is not possible with insecticides.

Dr Omoniyi Kayode Yemitan, who conducted thechemical evaluation, efficacy and toxicological assessment ofMouka Mozzi, endorsed the products as safe for all members of the family including pregnant women and young children.Dr Yemitan, who is of the Department of Pharmacology, Therapeutic and Toxicology at the Lagos State University Teaching Hospital, explained that the active ingredient in Mouka Mozziis extracted from plants which makes it non-hazardous for humans.

Representing the Lagos State Commissioner for Health, Dr. Olajide Idris, the state Malaria Elimination Programme Manager, Dr. Abimbola Osinowo said the state government has renewed its commitment to tackling malaria usinga multidirectional approach including environmental management and integrated vector control for prevention of malaria, adding that Mouka has taken a step in the right direction with the production of its repellents.

“As you are all aware, malaria is endemic in Lagos State and it poses a major challenge to the state as it impedes human development. It is both a cause and consequence of underdevelopment and remains one of the leading causes of morbidity in the state…” the Commissioner said.

She went further: “The present administration has renewed the commitment of the state government to tackle the scourge of malaria using a multi-pronged approach including; environmental management and integrated vector control for the prevention of malaria; effective diagnosis and appropriate treatment of malaria cases; and monitoring and evaluation with emphasis on operational research and the use of its results for evidence based programming.”

Chairman, Lagos State Chapter of the Nigerian Medical Association(NMA) Dr Saliu Olugbenga Oseni, who was represented by Dr. Sodipo Oluwajimi, expressed admiration for Mouka’s repellent’s indigenous manufacture, adding that the NMA would be willing to endorse the innovation as it joins Mouka in its resolve to tackle the malaria scourge. “I am particularly happy that this product is borne out of Research and Development in Nigeria…and the very fact that it is an indigenous product is really commendable and we are willing to endorse the product,” he declared.

Earlier in the month, Mouka Mozzi was officially launched at theMouka Business PartnersConference which held in Lagos, Abuja and Enugu. World Malaria Day is commemorated on April 25 annually by the World Health Organisation, in order to sensitize the global population about malaria and its health and economic burdens. The World Malaria Day is also a means by which emphasis is placed on the need for regular investment and continued political commitment for malaria prevention.